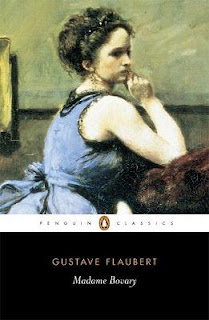 We first meet Charles Bovary as a schoolboy mocked for his outlandish fashion and an unfortunate mispronunciation of his name due to nerves. His mother dotes on him, focusing her attention on him and the running of their household instead of her increasing frustration with her husband. After one short marriage he finds himself enjoying the freedoms of single life, but then he meets Emma Rouault. He is completely besotted with her and she assents to marriage, imagining her life as a newlywed will meet all of her romantic dreams. Unsurprisingly, life doesn’t quite match up to her imagination, and she embarks on a series of affairs with tragic consequences.

Emma is immature, vain, and foolish. She abuses her husband’s naivety and love for her, thrusting them into grave financial difficulties. She tries only vaguely to conceal her misdemeanours and many of their friends suspect her indiscretions. Charles is loyal and blind to the reality of his marriage. Emma resents him for his happiness while she is so disappointed in her choice of spouse. Her expectations, however, were unlikely to be met, believing that he should know everything and excel in many fields. Charles is broadly mediocre, but in her distress she misses the value of his devotion. Despite her many flaws, Emma is not an unlikable character. Indeed, her belief that everyone else is living a far more exciting, lavish life is one that many can relate to. For those who have felt the depths of darkness descend, her despair at thinking about a future of misery will be familiar, the feeling of panic and helplessness at a future she does not want is claustrophobic and intensely upsetting.

This is a book of high drama and hoped-for passion. Emma does not do emotions by half, imagining herself in a great romantic story. It also deals with the more mundane aspects of married life, so despised by Emma. Charles feels the familiar conflict between pleasing his wife and obeying his mother’s wishes. He is stuck in a difficult situation with a demanding wife who doesn’t love him (a fact he remains blissfully unaware of for the most part) and a mother jealous of the affection he has for his wife, perceiving it to be a rejection of the love she has provided. He is no great romantic hero, but he is kind and loyal. Unfortunately, his story is never destined to end well. He is somewhat reminiscent of Emily Brontë’s Edgar Linton.

Flaubert is famous for having spent years writing and re-writing Madame Bovary, obsessing over every sentence. The result is a compelling read with a dramatic conclusion.

Pick up a copy:
Bookshop
Foyles
Waterstones
Posted by Ramblings of a nobody at 17:15