(M)otherhood: On the choices of being a woman, Pragya Agarwal 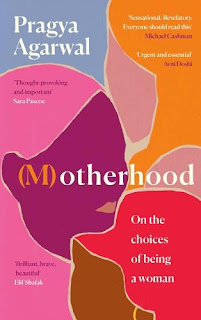 In this blend of memoir and essay, Agarwal takes a deep dive into reproductive health while exploring her own motherhood journey with great honesty. She lays out in her introduction that she is writing from personal experience and that the book will therefore not cover every scenario. Nonetheless, she reminds us of the intersectional nature of the subject throughout, detailing how various factors can lead to very different experiences and outcomes.

An overarching theme is that of stigma and control in the way female bodies are viewed and treated. She demonstrates how this is true from the first signs of menstruation through to problems with fertility and the lack of purpose ascribed to women once they are beyond their childbearing years. The discussion of control over women’s bodies and the right to access safe and legal abortion feels particularly pertinent at the moment.

A lot of research supports the writing of this book. I was especially interested to learn about the realities of ageing sperm and how the age of men impacts fertility. It is a widely held belief that for women there is a ticking clock for having a baby, but that for men it is possible to father a child at any age. Although this might technically be true, the quality decreases greatly, potentially causing health issues in the foetus and playing an important role in miscarriage. Another area I’d never thought much about is how pregnancy tests were carried out before the ones we’re so familiar with today. It turns out injecting mice and frogs with a woman’s urine was used well into the twentieth century!

Alongside these fascinating tidbits and thought-provoking discussions is the tale of Agarwal’s own journey with fertility. Her first pregnancy which almost killed her was later followed by secondary infertility, punishing rounds of IVF, and ultimately surrogacy. Amid her desperation to become a mother again she considers what it is that drives her. Looking into surrogacy opens a discussion about ethics, guilt, and the narrow definitions society uses for pregnancy and motherhood. She struggles against doubts that she’s not a real mother because she’s not able to carry her babies or breastfeed them. New motherhood also wracks her with guilt not just about her newborns but also her teenaged daughter who’s increasingly fending for herself. It is an emotional book, evoking the endless worries and conflicts of trying and becoming a parent. Her husband’s presence in the book is on the periphery, appearing to reassure her against her concerns and providing a supportive presence. We don’t see much of how the process affects him.

This is a moving, well-researched book that will make you angry at times and deeply moved at others. The focus is on the impact of a woman’s body, and society’s view of it, on her life choices, but Agarwal also touches on other subjects. Most notably, her feelings of displacement, having grown up in India but now living in the UK. Both countries simultaneously feel like home and don’t. Her feeling of otherness comes through gently to start but more forcefully as her story develops. An engrossing, informative read.

Pick up a copy:
Bookshop
Foyles
Waterstones
Posted by Ramblings of a nobody at 17:01