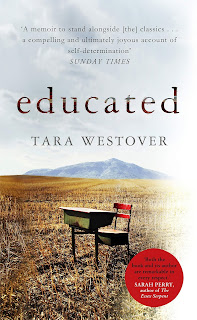 Westover was brought up in a Mormon family on a farm in rural Idaho, sitting in the shadow of Buck’s Peak. Her father’s beliefs are extreme – he prepares for the end of the world and goes through a crisis when the clocks tick over into 2000 and nothing happens, he’s so paranoid that the government is trying to infiltrate their lives that Tara didn’t even have a birth certificate, no schooling, and no professional medical attention, no matter how seriously injured. There’s a strong belief that women should be subservient to men, and her mother bowed under the pressure to conform. When her older brother Shawn becomes increasingly violent and jealous, not just with his girlfriend but also his sisters, their parents turn a blind eye, refusing to admit the truth. They prefer disowning their daughter to confronting him and protecting those around him.

She realises that her only way out is through education and despite having never been to school manages to gain a place in college. This proves to be a huge shock – her classmate’s behaviour is as outrageous to her as hers is to them – she doesn’t wash her hands after using the bathroom and leaves food to rot in the fridge. Her studies reveal parts of human history that she has previously been entirely ignorant of – in one class she asks what the word Holocaust means, much to the horror of her fellow students who think she is making light of it. The more she learns the less compatible she becomes with the rest of her family, although she continues to go back and hopes for reconciliation.

This is a remarkable story of academic success against the odds but it is also an honest account of a life punctuated with abuse and the struggles of trying to form a sense of self when your own family tries to stifle your potential and deny your memories. She is completely open about the fallibility of her own recollections, detailing how she pieced together some scenes from the memories of others who were also there, often with conflicting tales.

The scenes of abuse are hard to read but the casual attitude to daily mistreatment depicted is harder to swallow. She lays bare the damage her family life has done to her, making it almost impossible to hold down a relationship and causing numerous mental breakdowns. She also explains the way she can see attempts at rewriting her own story over the years, seeing the way she reimagines events in her journal, denying the true horrors.

The amount of serious physical injuries they all incur is astonishing, although not surprising considering their work practices, but they survive beyond the odds with the application of home remedies. This only goes to further boost her parents’ reliance and belief in their abilities and God’s favour. It can be infuriated reading of the negligent behaviour of her parents, and it’s hard to imagine what it would be like living in such a family, even though she does an excellent job at conveying her own experiences.

This is a brilliant, emotional read that doesn’t have a neat happy ending. She is still living with the fallout from her choice to get an education and tell the truth. It is heartening however that she does have moments where she is able to feel free, to be honest about her upbringing with her friends and colleagues. Her tale is a remarkable one of self-preservation and success without ever sugar-coating the reality of what she experienced as a child and continues to have to cope with. At times difficult and infuriating, it is eye-opening and absolutely worth a read.