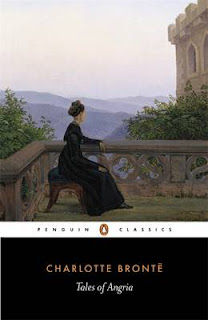 It is well known that the Brontë siblings wrote stories in imagined worlds in their youth. The world of Gondal, Emily and Anne’s creation, is sadly largely lost to time, but more of Branwell and Charlotte’s writings on Angria have survived. In this book, Heather Glen brings together the last five of Charlotte’s Angrian tales, written in her early twenties. They were written with an intended audience of her siblings, the knowledge of the history of the characters assumed. Glen helps to bridge the gap with concise introductions to each piece, allowing the reader to jump right in and enjoy the early works of such a well-loved writer.

The tales are mostly narrated by Charles Townshend, a gossipy commentator on the aristocratic lives within. He plays roles of varying importance in the stories and speaks directly to the reader at times. The main male protagonists are ageing former heroes - the Duke of Zamorna, whose many infidelities feature, and the Earl of Northangerland, whose daughter falls under the spell of Zamorna in the final tale. These fading heroes were inspired by Napoleon and the Duke of Wellington, the heroics of which were fading into distant memory by the time Charlotte was penning these last Angrian tales.

The female characters at first seem alarmingly subservient – Mina Laury declares herself hopelessly devoted to Zamorna, whose inattention does not weaken her affection. She is, however, also intelligent and able to hold her own. ‘Strong-minded beyond her sex, active, energetic and accomplished in all other points of view, here she was as weak as a child. She lost her identity. Her very life was swallowed up in that of another.’ Zamorna has long lost interest in her but refuses to give her up, leading to a duel with Hartford who has fallen for her.

In the final piece, Caroline Vernon, we see again Zamorna’s lack of morals, leading to a desperate dispute between him and Northangerland in which we see a very different side to the latter. Glen in her introduction highlights the Byronic characteristics of both the men and women as well as Brontë’s tongue in cheek response to Gothic traditions.

A recurring theme is also that of colonisation. Most of the characters are not Angrian natives but have taken control of the land. There are many mentions throughout of discord between the different regions of Angria and the temperaments of the natives. On the surface these may seem like frivolous tales of the upper classes but there’s a lot more bubbling just beneath the surface.

Brontë was not writing mere childish scribbles but informed, intelligent responses to the political and literary world that she inhabited. From the first her character sketches are witty and cutting, concisely setting up characters in their first introduction. She alludes to contemporary trends and issues that her readers would have picked up on but also those closer to home – in Henry Hastings we see a sister’s response to a brother’s disgrace.

The Roe Head Journal fragments are the least easy to read because of the lack of narrative cohesion (that was never intended) but it’s fascinating to see her continual pre-occupation with Angria, the frustration of not having the time to write, and what it was like to have Branwell decide the fate of characters she had created.

A lot of reviews suggest these tales are difficult to get into and are only of interest to scholars. I found quite the opposite to be true. Of course you have to approach them as short stories or vignettes rather than a novel, but they are genuinely absorbing. The characters are not all likeable but they are not designed to be. Their misdemeanours are central to the plot and Brontë’s characteristically rich, clever prose is apparent in these early works. A thoroughly enjoyable, enlightening read.