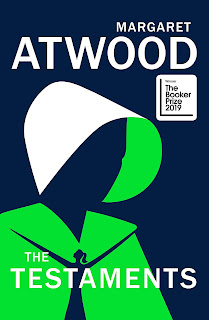 Atwood’s much anticipated sequel to the increasingly popular The Handmaid’s Tale opens up the view of Gilead with three perspectives – Aunt Lydia, Daisy, who has grown up in Canada, and Agnes, a girl who has lived her whole life in Gilead, and although devout does struggle with the restrictions imposed on her. Set roughly fifteen years after the previous book, we are given a glimpse into the fall of the regime, as well as further insight into the early days and the hardships the founder Aunts had to suffer. Aunt Lydia, in her former life, had been a judge and worked with women’s charities, a far cry from the horrors she inflicts in her new role. At her own admittance she chose her own safety over that of others. Her account is written with a future reader in mind that she believes will judge her for the decisions she’s made. She points out though, that they will never know what they would have done in her place. Atwood giving her the compassionate background that she does really hits home that anybody can do terrible things, she wasn’t inherently evil, and any one of us put in that situation may well have chosen the same path.
Lydia shows herself to be cunning and tactical from the moment of her acceptance into Gilead as a founder Aunt, being careful not to give away too much of herself but carefully storing potentially useful facts about the others. This calculated behaviour has made her almost untouchable, the Commanders fear the secrets she knows. With time she seems to have become less willing to dole out unnecessary physical punishments where others still delight in it, she sees herself as quietly looking out for the handmaids. It’s also commented that the new waves of aunts lack the hardness of the founders – they haven’t had lives before Gilead, did not experience the brutal initiation suffered by them, and know of the outside world only in theory.
It is interesting to hear the perspective of a Gilead daughter. Their view highlights how much has been denied them in not teaching them to read. They are taught subservience through ignorance, reinforcing the repeated theme of ‘knowledge is power’. Even in their innocence they know enough to be afraid, are taught to consider the handmaids as sluts, a painful label for women who are repeatedly abused. There is shame of having been born of a handmaid. The girls are taught to fear men and not to provoke them into lust, and they internalise this, becoming overrun with anxiety when marriage is arranged for them, many choosing suicide over life as a wife. It seems nobody is truly happy in Gilead. Men dispose of wives leisurely but even the most powerful Commander lives in fear, constantly on guard. Nowhere is completely private, and nobody is safe.
For Daisy growing up in Canada, Gilead is taught in school but can never be fully understood from the outside. She is shocked that her parents are civil to the Pearl Girls who pass by, sent from Gilead to bring back converts. It seems bizarre that the government allows such migration, but it is made clear that war with Gilead has not gone well for other countries. Self-preservation again plays a role.
A sequel that feels less subtle than The Handmaid’s Tale. The twists are not hard to see coming and everything is laid out in plain sight. The final sections are fast paced but the culmination of the story is over quickly. Everything’s a little too neat and predictable and at times it feels as though Atwood is playing to fans of the TV show. I would have preferred more separation. Not a bad read but not as original or revolutionary as some of her other books.