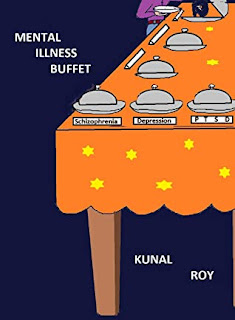 Thanks to Entrada Publishing for the review copy of this book. All opinions expressed are my own.

Roy’s debut begins with a kick – the death of his mother when he was just fifteen years old. He explains the contrast between the happy, protected life he’d had previously and the struggles he faced after. He notices a dramatic change in his personality – he became withdrawn, hated people visiting, and began having terrifying convulsions. From here he describes his struggles with a wide range of mental illness including body dysmorphic disorder, anxiety, and schizophrenia. He is very honest in his disclosures and his assessment of the treatment he received from professionals as well as attempts by his family to help see him through the difficult times.

The book is split into four parts and each of these consist of short vignettes of different events. The brevity of these sections and seeming disconnect to what came before at times leave you wanting more details and deeper context. For some this comes later, but the style takes some getting used to. The tone is conversational and he clearly lays out his arguments. The first couple of parts feel more like notes for a book or an unedited blog post than a well put together book, but as it progresses he goes deeper and you find yourself swept along with his story. The glossaries that felt so jarring at the end of the first part also expand with time and allow him to further his analysis.

One of the recurring themes throughout is the disconnect between medical professionals telling you you’re getting better even though you don’t feel it yourself. He puts this down to the daily damages associated with mental ill health, something he urges everyone supporting someone in this position to take more account of. He describes some of these daily damages as including the feeling of being rejected, the inability to cope with social challenges and the guilt associated with this, embarrassment, and over-protection. He argues that the way professionals measure progress is limited by the frequency of episodes and that they don’t take account of the daily challenges that can make you feel like you’re failing.

Another interesting aspect of the book is his relation to others. He repeatedly refers to his inability to have ‘normal’ relationships and his regret at not being able to have the casual comfort with others that many of his peers seem to have. His familial relationships are also a strain, even with his twin brother. He was used to being the witty, lively one of the pair and seeing his brother grow and flourish while he faltered, caused jealousy and a feeling of isolation. Similarly he felt ignored by other family members, while admitting that they really had tried but he had remained unresponsive. The most shocking revelation, both to Roy and the reader, came with the realisation that his family weren’t aware of his struggles beyond the convulsions. He had hidden that part of himself away so successfully without realising he was doing it.

The book got off to a rocky start but I’m glad I persevered as the insights that appear later are deep and meaningful. An interesting read for anyone looking to learn more about the lived experiences of someone with multiple mental illnesses. Short enough that you can read it in one sitting and allow yourself to be fully swept up in the story.