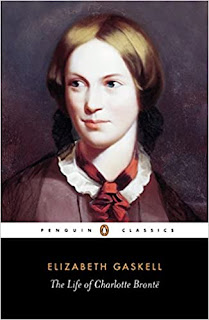 Gaskell’s infamous biography of Charlotte Brontë may contain some glaring omissions, but can tell us much about the time in which she was writing. Jane Eyre, although popular, had led to attacks on Charlotte’s morality. Gaskell’s moralistic portrait shows Brontë to be a devoted daughter, sister, and, briefly, wife, who put duty above her own desires. A female writer herself, Gaskell was all too aware of the unique criticisms levelled against women writers and attempted to portray her subject in an acceptable light to allow her work to be appreciated on its own merit.

In Winifred Gérin’s introduction to the Folio edition we are given an insight into the practical difficulties that impacted on the final book. The biography was required with haste, meaning Gaskell was at times sloppy in dealing with the wealth of letters provided for inclusion. Brontë’s friend Ellen Nussey was the main contributor and carefully curated her contribution, keen also to have her friend remembered as pious and demure. Mary Taylor, a friend who Charlotte spent much time debating politics, philosophy, and religion, had moved to New Zealand, meaning her recollections did not arrive in time for inclusion in the first edition. She also, regrettably, destroyed many of her letters.

One of the most notable absences for the modern reader is Charlotte’s unrequited love for M. Heger, her tutor in Brussels. His wife refused to speak to Gaskell, and although Heger himself did share some of their correspondence, all references to her passion for him are excluded. This made things difficult as Charlotte expressed her misery in letters to friends. Gaskell brought forward tales of Branwell’s demise to this time in order to justify her distress. Both brother and father receive some harsh treatment throughout which coloured popular opinion of them for many years. In attempting to sanitise Charlotte’s life, Gaskell condemned others. The book was popular and quickly ran to a second edition but it wasn’t long before libel cases and requests for revisions began pouring in, resulting in the much amended third edition. My copy included both the sections omitted in the third edition, and the additions, providing a sense of what a different book it became.

Armed with this knowledge I embarked on the biography with some sympathy for Gaskell and a better understanding of where its biases came from. It opens with a short history of Haworth and the family that she was born into. Haworth is described as isolated and wild, the family reserved but willing to help those in need. Charlotte is often portrayed as unhappy, anxious, and full of self-doubt bordering on hatred. We see her repeatedly disappointed when plans to see friends fall through and are reminded that beyond the legend she was just a normal young adult who needed companionship and dreamt of seeing new places, London holding a particular fascination.

Her special connection with her sisters is, naturally, examined, as well as her need to express herself creatively, her compulsion to write, and the upbringing that allowed room for nurturing imagination. A heartbreakingly detailed account of her final journey with Anne, to Scarborough, is provided by the friend who accompanied them. Gaskell does not shy away from the depression that overtook Charlotte on the loss of her sisters, the sad life she lived once those who truly understood her were gone. In her retelling of these tragic events she perhaps began the public fascination with their lives.

Gaskell states that when Charlotte can tell her own story through her letters and writings, that no other should take her place. The result is a book overflowing with extracts that sometimes reveal a side of her that doesn’t get much airtime today. This style allows us an opportunity to see the life she lived beyond the public persona she was so anxious of, albeit one strictly edited to convey the desired effect by her biographer. The letters are sometimes mislabelled however, multiple letters run into each other, and it’s not always clear who the recipient was.

I read this out of curiosity for this much maligned book more than to discover the facts of Charlotte’s life which are readily available, but was pleasantly surprised by the ease of writing and material I’d either not come across before, or that had slipped my mind. This saccharine portrait may be at odds with the passionate, radical life we accept today, but it may have helped save her from Victorian censorship, allowing us to continue to enjoy Charlotte’s work today.

Posted by Ramblings of a nobody at 13:54