A Bit of a Stretch: The Diaries of a Prisoner, Chris Atkins 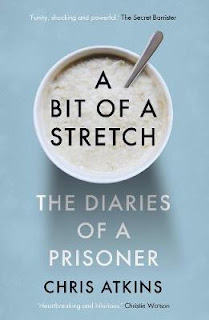 In July 2016, film-maker Chris Atkins was sentenced to five years in prison for his role in a tax fraud scheme used to finance some of his films. He was sent to one of Britain’s most notorious prisons, Wandsworth, where he kept a diary to help stay sane. What follows is a horrifying account that leaves you in no doubt about the sorry state of our prisons. Britain has the highest prison population in the EU and a reoffending rate of 48%. Chris Grayling cut staffing by a third during his tenure as Justice Secretary, resulting in prisoners being locked up in their cells for twenty-three hours a day, only being able to shower infrequently, and no training or education provision.

The outdated, overly complex bureaucracy of the prison system is endlessly frustrating as well as failing in severe ways, resulting in the early release of dangerous inmates, and protracted sentences for minor offences. Atkins does his best to wade through a system that doesn’t seem to make sense even to those enforcing it, but finds that the many forms he fills in generally remain ignored.

He is desperate to gain Enhanced status which allows slightly more freedom, and ultimately aims to be made category D, which would mean being transferred to an open prison. He picks up as many jobs as he can to aid in this but admits that he benefits from his race, affluence, and education. It is disappointing to see that social inequalities in society are mirrored in prisons and, although he acknowledges the unfairness of the system, Atkins happily takes advantage of the opportunities available to make prison life more bearable.

As part of his campaign to be moved into more comfortable accommodation he trains to become a Listener, a scheme organised by the Samaritans for peer support. His Listener status allows him a more spacious cell, but the burden of caring for others in a system that makes it virtually impossible for him to help them in any practical way takes its toll. He regularly sees people self-harming and rarely has the opportunity to find out whether they made it through. He talks about the fact that the complete lack of control and uncertainty experienced by inmates has a damaging effect on mental health, not to mention the isolation. Mental illness is punished as bad behaviour, meaning that those who are suffering are likely to have their sentences extended. There is an isolation cell for those at highest risk but the small, bloodstained cell that offers not a shred of privacy or comfort only serves to humiliate and exacerbate problems. The prison experience is hugely damaging to both prisoners and officers and Atkins talks openly about his own struggles to adjust to new environments.

An interesting read that mixes personal experience with facts and figures, and manages to be funny despite its dark subject. Atkins’ descriptions of the endless noise, lack of personal space, and loss of agency gives a shocking glimpse into prison life. He discusses the huge difference made by various cellmates, some endlessly cheerful, others absolutely terrifying. Whatever preconceptions you go in with, you’re bound to discover something new and reassess your views on the role and efficacy of prisons. A manifesto for urgent reform.

Posted by Ramblings of a nobody at 18:38