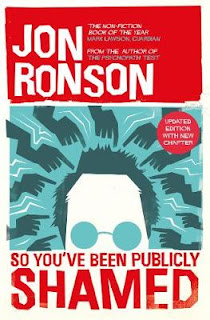 When Ronson became a victim of a spambot pretending to be him, he met with the creators to ask them to delete the account. They were less than obliging, and although he didn't think he'd come off well, he posted the footage from the meeting online. He was soon pleased to discover that people took his side and began trolling the creators. The spambot was deactivated and he basked in the glow of public justice. It soon got him wondering about the impact of such public shamings, which are a regular feature of social media. Public shamings are not a new concept, but in the past they have been presided over by justice systems - the people being punished had generally broken the law. On Twitter, people’s lives were being destroyed because of ill-advised jokes or unpopular opinions. The mob might move on to the next outrage quickly but for the person being shamed it can have long-lasting effects on their mental health and quality of life.

He meets with a range of people who have been on the receiving end of public shamings, as well as those whose actions were the catalyst for other people’s disgrace. In July 2012 Michael Moynihan noticed some inconsistencies in the work of bestselling author Jonah Lehrer. He did some digging and soon found enough to discredit Lehrer, who begged him not to publish his findings. He did, and regretted it. Lehrer made a public apology in front of a live Twitter feed of people’s reactions. The event turned into a nightmarish humiliation for Lehrer. Moynihan also suffered, experiencing symptoms similar to those who have been through a traumatic event. Throughout the book, Ronson meets with those who have been shamed and have managed to rebuild some sense of normality, but with the constant terror of their story rising to prominence again. He also meets those who remained virtually unscathed and wonders what makes it so much worse for some people.

In an attempt to find out, Ronson takes part in an anti-shame workshop in which participants attempt to let go of shame by revealing their deepest secrets. He’s not entirely convinced by this method. Later, he meets with people who have learnt how to manipulate Google search results in order to bury the stories they would like forgotten. This is useful not only for the original subject but for those who share their name who suffer by association, but these services are not cheap and therefore not available to the majority of people.

In the afterword he discusses the responses he received to the book and his own small taste of shaming when a controversial paragraph present in the proofs but removed from the final edition made its way onto social media. He considers the impact of public shamings and the way in which fear of being the subject of a pile on leads us to censor ourselves. ‘We see ourselves as non-conformist, but I think all of this is creating a more conformist, conservative age. ... We are defining the boundaries of normality by tearing apart the people outside of it.’

An interesting, easy-to-read book that shows the very real consequences of the mob mentality we’ve all become so susceptible to in an age of anonymised social justice. His critique of popular case studies offers food for thought and you’ll find yourself questioning people’s motives and the damage being done to the possibility for debate and varied world views. He admits when his experiences don’t match his expectations however, such as the young man sentenced to public humiliation - walking along the side of a road with a sign proclaiming that he killed two people while drunk driving. Instead of his punishment destroying him as similar sentences did to others, he found a purpose in life, being an example to others, rather than dwelling in a pit of of guilt in a prison cell. An eye-opening book on the complexities of misdemeanours in the digital age. ‘The great thing about social media was how it gave a voice to voiceless people. Let’s not turn it into a world where the smartest way to survive is to go back to being voiceless.’