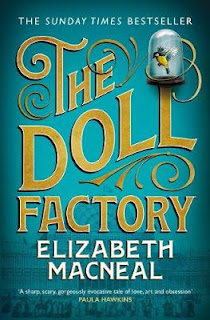 Set against the backdrop of Victorian London, Macneal’s debut is part thriller, part love letter to art. Iris works in a doll factory with her sister Rose, painting faces on dolls and unable to resist trying to divine whether the child its meant to represent is dead or alive. This little tinge of darkness that appears at the start will set the tone for much of the book. Louis is a budding artist and member of the Pre-Raphaelite Brotherhood, desperately working on a piece for consideration at the Royal Academy. When he sees Iris he knows she is perfect as the inspiration for the Queen in his painting. Silas spends his life away from polite society, preserving and stuffing dead animals, often selling them to artists, but ultimately hoping to open his own museum. The Great Exhibition, in construction at the time the book is set, is his immediate focus. Their lives intertwine in a tale of passion, obsession, and ambition.

Iris is keenly aware of the precarious position of women in society. She watched as Rose’s life fell apart when the man she was due to marry broke off contact when she fell ill. They’re now stuck in unhappy lives with parents willing to cut them off if they do anything considered inappropriate. Rose dreams of owning her own shop and Iris longs to create art. She spends her evenings working on paintings considered scandalous, scraping together dregs of art supplies. When Louis shows interest in her she sees her chance to be trained as an artist, but her association with the Pre-Raphaelite Brotherhood and her role as model means she is shunned by society, who consider her little more than a prostitute. As time passes it becomes apparent that Louis is oblivious to her diminished status, and that even his peers do not take women seriously. We are reminded time and again how fraught a woman’s position is and how vulnerable to male violence.

Iris’s sections of the book are nonetheless the much lighter - her budding talent and enthusiasm for a life different to the one she has grown to expect are heartening, as is her first taste of love. The sections focussing on Silas however, become increasingly sinister as the book progresses. In early passages you almost feel pity for him - he is an oddball and an outcast and mourns the loss of his childhood sweetheart. It soon becomes apparent however, that he has a violent streak and an unhealthy obsession with women with red hair, such as that of Iris. We are given hints that his violence may have led to fatality and it makes the book unputdownable as you want to discover the truth of his past and how it will impact on the other characters. He is entirely delusional, imagining an elaborate love story between himself and Iris, and unable to cope when she doesn’t behave as he’d like. The reader is led to worry for her safety as we see how easily he snaps, how other characters seem to remember attacks he has carried out, yet Silas has convinced himself an innocent party, misunderstood and mistreated. He is an extremely unpleasant character, yet fascinating to read.

Fans of the period will enjoy references to famous personalities and the art world, Macneal seamlessly placing the fictional Louis in the company of the Pre-Raphaelite Brotherhood. Her descriptions of the capital ooze with atmosphere and danger, and shines a light on the lives of those struggling to survive. The compassion and generosity of Albie, an orphan who sells animal corpses to Silas in order to save for a new pair of teeth, is touching. He has his own dreams but puts his younger sister, who has been forced to sell her body, before himself. Iris is like a sister to him and he is wracked with guilt when he realises what he’s brought upon her in introducing her to Silas. Albie is one of the most likeable, sweet characters in the book, and you root for him to have a happy ending.

Despite dealing with dark subjects, Macneal succeeds in bringing some lightness to the book with moments of touching emotion and humour, often provided by Louis’ pet wombat Guinevere. This is a promising debut with evocative writing and intriguing characters. There are perhaps a few too many side stories of no real consequence, but once you’ve got your head around who is who it’s a hard book to put down.