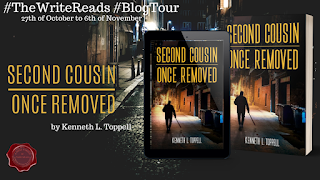 This post is part of the Ultimate Blog Tour for the novel. Thank you to the author and The Write Reads for providing me with a copy of the book in exchange for an honest review.

Henry Atkinson is an ageing attorney who has taken up genealogy to fill the gap left by his now separated family. To his surprise, he discovers a professional hitman in his family tree, and when he makes contact becomes convinced he is responsible for the death of his uncle Ira. When a woman, Carolyn, turns up from his uncle’s business he is certain his life is in danger. What follows is a race across states both running from, and searching for, his cousin Shelley.

The premise is a tad unusual and you find yourself wondering why the characters are acting as they are. They seem to very easily adapt to life on the road, discarding their true identities, and predictably, falling in love with the person they’re pretending to be married to. The search for Shelley and the twist that makes them re-assess their morals are not particularly engaging. There are attempts to build suspense and mystery with repeated mentions of an incident that happened long ago, but it doesn’t quite hit the mark. The reveal is also fairly inconsequential and largely a device to progress an already convoluted plot.

The characters don’t have a lot of depth - Henry develops a lack of self-confidence for a while and Shelley apparently only accepts jobs where the target is not a good guy, but there’s little in the way of real development. Carolyn is quite an outdated portrayal of a female character. There’s a lot of descriptions of her physical appearance that will make you cringe and she’s often demure and subservient. Despite some blatant gender stereotyping, Toppell does at least give Carolyn and Marian, the only two female characters, an active role in the denouement.

Each chapter is narrated by either Henry, Carolyn, or Shelley. For the most part they pick up where the previous chapter left off, but there is occasional overlap to show scenarios from multiple points of view. The first chapter from Shelley’s perspective is one of the more exciting moments in the book as up until then he is shrouded in mystery and conjecture.

Overall, not to my taste, but if you enjoy dialogue-heavy writing and exploring the mindset of a professional killer, you might enjoy it more than I did.