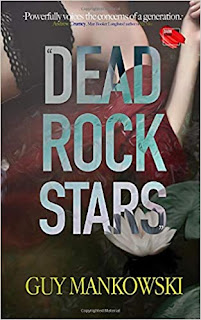 Thanks to the author for providing me with a free copy of the book in exchange for an honest review.

Emma Imrie had always dreamed of being a rock star, of writing songs that really meant something. She’d been on the cusp of success when her life was cut tragically short, leaving her younger brother Jeff to navigate his grief without the support of his distant parents. He is sent to spend the summer on the Isle of Wight with a childhood friend who is unlikely to provide much emotional support. Finding himself truly alone for the first time since his bereavement leads him to releasing some of the emotion he’s been holding back, and reading Emma’s diary to discover what really happened.

The two narrative strands - an older Jeff remembering that strange summer, and Emma’s narrative through her detailed diary entries run parallel, but it is Emma’s voice, her story, that looms largest, as it seems she did in life. The diary entries come thick and fast and so we don’t get to know Jeff as deeply, to start with at least. It leaves a slight disconnect and a sense of apprehension of how the space will be filled when we reach the last entry. There’s plenty still to come however, and although there were parts of the story that didn’t feel quite right, the way Mankowski writes grief is raw and honest. Jeff’s need to understand what happened, his feelings of wanting to keep reading the diary because it feels like it’s keeping part of his sister alive, are heart wrenching and relatable. Mankowski’s strength lies in the contemplation of life and death and the places in between.

Jeff’s parents are largely absent from the novel, but we do get a good sense of Emma’s relationship with her mother. The opening passages detail Jeff’s single experience of seeing his sister perform in Camden, of his mum’s disgust at the world she has chosen to make her own. Throughout the diary entries we see many examples of them being unable to compromise or understand each other’s point of view. They are clearly neglectful as parents, leaving the siblings with damaged self-esteem and a desperate need to feel wanted. As Jeff matures over the course of the book however, he comes to understand how his mum was also just human like them, trying her best to cope with difficult situations and relationships.

Mankowski’s skilful world-building is demonstrated successfully in this novel, whether it be the beauty and peace of the sea, or the London of Emma’s dreams. He teases out the contrast between reality and fantasy. Never is this more clearly drawn than in Jeff’s memories of going to collect Emma from hospital after her first overdose. He encapsulates the many faces of the city and its potential for both good and bad.

There’s a strong sense of a coming-of-age novel in this book, both for Emma as she tries to cope with her disillusion, and for Jeff as he struggles to make sense of his grief at such a formative age. The combination of Emma’s diary entries and his own memories show how her unfortunate relationship experiences turned him away from the idea of love, afraid of letting people in for fear of the damage they could cause. Perhaps because Emma’s character is so strong, his own self-doubts and dreams get a little lost. It feels slightly out of character or unexpected when he expresses certain views, but they are also authentic representations of the teenage experience. In a way, his summer on the island is a chance for him to find out who he really is, although the shadow of his famous sister is never far away.

A compelling read that might try to cover a little too much ground, but nonetheless does so with style. References to the Riot grrrl movement and other cultural references from the 1990s had me diving into online research and opened up some interesting topics. This is a well-written book which manages to make an absent character incredibly present and nuanced. A great read if you’re interested in the 1990s Camden music scene, the idea of the tortured genius, or a coming-of-age book that will fully immerse you in the world of its characters.