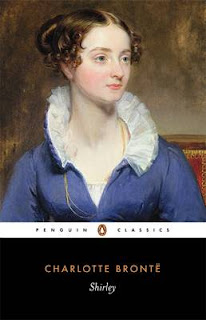 Shirley is perhaps Charlotte Brontë’s least read novel today, but this historic, social novel, has a lot to offer. The book doesn’t have one overarching narrative thread - there are the industrial depression and Luddite uprisings, some elements of romance, and plenty of social commentary. Most prominent however, are the two main female characters - Caroline Helstone and Shirley Keeldar. Their positions are opposite - Shirley has money and is strong-willed and defiant, Caroline has no fortune and is more obliging, but both find difficulties in their status. It becomes clear that for many, money takes precedence over all else, meaning that Caroline cannot marry the man she loves, and Shirley is wary of potential suitors, as well as being reluctant to give up the liberty her single status affords.

Brontë is forthcoming with depictions of the plight of women.

What do they expect them to do at home? If you ask, they would answer, sew and cook. They expect them to do this, and this only, contentedly, regularly, uncomplainingly all their lives long, as if they had no germs of faculties for anything else - a doctrine as reasonable to hold as it would be that the fathers have not faculties but for eating what their daughters cook, or for wearing what they sew. Could men live so themselves? Would they not be very weary? And, when there came no relief to their weariness, but only reproaches at its slightest manifestation, would not their weariness ferment in time to frenzy?

Caroline has very little autonomy, even being refused the opportunity to make her own money as a governess, and so finds herself with no occupation to stimulate her mind or add interest to her days. She ponders what her life will be like with very little chance of marriage. Her home life is unhappy; she has no contact with her mother, her father is dead, and her uncle is not pleasant company.

As is often the case in Brontë’s writing, the characters are well-drawn. She is expert in providing descriptions that instantly give a sense of personality, revealing anecdotes that show their true nature. The opening chapter introducing the three local curates contain cutting appraisals and touching stories that will keep you amused and curious. Some parts of the novel drag a little, but the character sketches are little gems scattered throughout.

Despite there being hardship and unrest present, the main characters are not suffering themselves from the downturn in industrial work, so this always feels like a background feature rather than the main thrust of the book. In our introduction to Robert Moore we are told that he little thinks or cares where his workers get their daily bread when he lets them go, which may fool you into thinking the plight of the industrial worker will play a much more prominent role. In fact, little space is given to the working man.

This is a novel that’s hard to define. Some sections are slow but others are utterly gripping. The headstrong Shirley, famously based on what Charlotte imagined her sister Emily would have been if she’d been born into wealth and health, is a force to be reckoned with, and shows herself to be more than capable of holding her own time and again. There are some touching moments that some may find a little twee but which I enjoyed. Illness and mortality are a concern, and remind us of the fragility of life. It’s said that Gaskell’s Mary Barton, and the loss of her siblings during the writing process, changed the course of the story. We’ll never know for certain what Charlotte had originally intended for it, but what has come down to us is worth picking up, with Brontë's command of the language in her beautiful prose evident throughout.

Posted by Ramblings of a nobody at 18:07