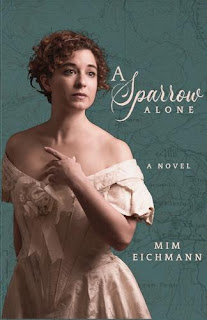 This post is part of the blog tour for the novel. Thank you to The Write Reads and the author for providing me with a copy of the book in exchange for an honest review.

In 1890s Colorado in the midst of the Cripple Creek gold rush, we find teenaged Hannah Owens suddenly without a mother. She becomes a domestic apprentice in the home of a wealthy doctor but soon finds herself once again being tossed around by fate. She encounters a huge amount of suffering and is forced to act well beyond her years, desperately trying to avoid the perceived taint of prostitution that afflicted many women, often victims of sexual assault. We watch helplessly as a tangled web of intrigue and dishonesty forms around her, tripping her up every time she looks about to get ahead.

A number of the characters are drawn directly from history, including Winfield Scott Stratton who discovered a huge gold mine that started the Cripple Creek gold rush, and Pearl de Vere, the infamous owner of high-end brothel ‘the Old Homestead.’ The sudden huge population growth, and the resulting high demand for prostitutes, the local devastating fires, as well as unrest among the miners, provide a dramatic backdrop for Hannah’s story.

There’s a fairly large host of characters and it can take a little while to understand who they all are and how they fit together, especially as some appearances are fleeting. Eichmann provides moving back stories for many of the characters, fictional or otherwise, which help the reader appreciate the person behind the legend. There is great camaraderie between many of the women who have often faced similar challenges. The poverty that many live in, however, does on occasion lead to some callous behaviour as they desperately strive for some stability for their offspring. Stratton himself refuses any kind of commitment and takes advantage of many women who receive only coldness when they find themselves with child. John Barrington also positions himself to take what he wants, manipulating situations so his victims feel themselves to be completely out of options.

The mistreatment of women and the perception of them as commodities is a recurring theme. There are scenes of assault that can be difficult to read, and it is made clear that their lives can be ruined by it. Pearl is described as having great talent and compassion but is forced to put her dreams aside when she is impregnated by her father and labelled a ‘whore’. Hannah herself is used as part payment for her family’s debts, completely without her knowledge or consent. She hears tales of other women who have died as a result of such arrangements. There is no paternal affection evident, just businesslike transactions with the lives and bodies of their daughters. Hannah despairs and feels defeated when she realises the truth, but is determined and resilient, doing all she can to avoid a life of abuse, aided by those who were not able to save themselves.

There are undertones of discrimination throughout, and racism is often alluded to. When a white mother gives birth to a baby of colour they are forced apart, being told in no uncertain terms that they would not be accepted. We see later in the novel the impact of racial segregation and the way it deprives so many of an education. As a modern reader it is a stark reminder of the inequalities that have existed for centuries and have not yet been fully eradicated.

This is an interesting read that highlights the imbalance of power and expectations, with victim blaming rife. It is easy to forget just how young Hannah is, having been through so much in her short life. The particular historic setting was new to me but fascinating to learn about. There is great strength in many of the characters as well as villains that make resistance feel futile, so uneven is the playing field. Nonetheless, Hannah persists and is a gentle light in a dark world.