The Quest of the Absolute, Honoré de Balzac 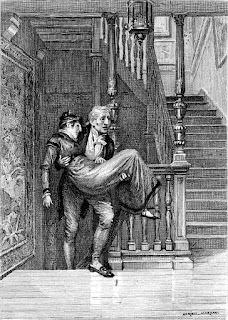 Balzac’s 1834 novel considers the nature of genius and the lengths it will take people to. Balthazar Claes devotes himself to the pursuit of the philosopher’s stone, spending his own fortune and that of his family in the process. Joséphine has always been a devoted wife, but despairs at the destitution he is leading them into, fearing for the life their children will have once she is gone. Early in the novel Balzac writes ‘Too often, vice and genius produce similar results, which mislead the multitude. Genius is nothing more than constant excess, which devours time, money, and the body, and which leads to the poorhouse even more rapidly than evil passions.’, setting the tone for the story to come.

Frequently you will despair as Balthazar’s seeming obliviousness to the needs and lives of those who love him. Despite the failure of his experiments, his family are compelled to offer what they can to help him. The other characters cannot think poorly of him, seeing the agony of a frustrated mind, and so, ultimately, the final line inflicts a sharp wound to the reader.

The family dynamics and role of women in the novel are interesting. Both mother and daughter, Marguerite, try to curb Balthazar’s recklessness to little avail. Indeed, there are moments of softness and affection, where we see that even in the midst of his mania a small part of him remembers his family. On the other hand, these can feel like small consolations of a family desperate to find some evidence of paternal affection. They live in fear of what he will do to himself if his experiments are taken away, and ultimately sacrifice themselves for his intellectual pursuits.

Balthazar is a conflicting figure - his behaviour is unacceptable in many ways, but, near the end of the novel Balzac writes ‘That colossal sorrow, so courageously restrained, had its effect on both Pierquin and Emmanuel, who sometimes felt so deeply moved that they were inclined to offer him the money necessary for a series of experiments: so infectious are the convictions of a genius!’ Whether or not you believe he is a genius, or feel any sympathy for him in his depressed state, Balzac is here offering us a chance to see him through the eyes of those close to him. As an outsider, the willingness to repeatedly bail him out may seem illogical, even foolish, but we are reminded how convincing such a level of conviction can be, drawing all those around him into the pursuit of the absolute.

This is an interesting, accessible book with characters that will keep you pondering after the last page. A great one to try if you want to broaden your classics reading.