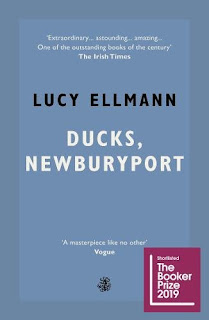 Ellmann’s epic stream-of-consciousness novel takes the reader into the mind of an Ohioan mother of four. Her narrative is interrupted every hundred pages or so with passages about a mountain lion’s separation from her cubs. This provides a nice juxtaposition, as well as offering an alternative view of humanity. Buried within the main narrative, amid musings on popular culture, politics, police brutality, and all the general concerns and anxieties, is a story of an ordinary life with some very real emotional challenges.

One of the main themes of the novel is motherhood - the narrator’s feelings of incompetence and unworthiness, as well as her grief and guilt over the loss of her own mother. The lion narrative also draws on the devotion of a mother and the lengths she’ll go to in order to protect her offspring. Our narrator, who remains unnamed throughout, worries about not being able to look after her children properly, of being neglectful. She variously acknowledges the importance and difficulty of parenting, and questions whether she should have become a mother. ‘the fact that making food for people is actually a highly pressured, skilled, responsible job, just like motherhood, but nobody seems to notice,’ gives us a sense that she feels strongly that making a living baking pies while looking after her children is not valued by society, and this feeds in to her own sense of self-worth. That she can acknowledge that her occupations are important and demanding gives the reader some hope that she has the potential to see value in herself.

Anxiety plays out for her in almost every aspect of her life, but perhaps never more so than when it comes to her children. She admits to feeling shy around them and being afraid to tell them what to do, but it this line on people deciding to try for a baby, that really resonates, ‘the fact that nobody ever tells them that the terror of what could happen to your kids cripples your life, the fact that all mothers are going through this all the time, I think; but we never talk about it,’

Fear of death and loss hangs heavy over her, the repeated mantra of having been broken by the death of her mother is present throughout. She talks of not being able to love fully since because she can’t bear to go through that pain again. Her own cancer journey contributed to the sense of fragility of life and yet she offers herself no compassion, feeling instead that she failed her family during her treatment and recovery. Reading this during 2020 made the fears and anxieties all the more pertinent and difficult to read and sit with.

Alongside the personal worries and dramas are a lot of references to awful real life events - school shootings, assault, and a myriad of other violent crimes. Some topics are familiar to the international reader but many may not have made the news outside of the U.S. It had me researching names and events that I hadn’t come across before and sharing some of the despair.

The impact of human activity on nature is also present and plays along neatly with the lion’s tale, although it is often the negative impact on humans with the likes of the proliferation of PFOA in almost everything that captures most of the narrator’s attention. She reminds us all of the way people carelessly poison the planet, and that it’s being destroyed for all living creatures, ‘the fact that the good news right now is that animals don’t yet know we’ve wrecked the place, or they don’t know we did it at least, or they’d come after us, red in tooth and claw, the fact that it’s actually pretty lucky they don’t blame us for it,’

The climax of the novel builds, the lion sections appear more frequently as the two lives seem on the cusp of overlapping. Despite there being some dramatic events, the end of the novel feels somewhat anti-climactic as the narrator continues in her never-ending monologue, her sense of inadequacy still intact. For some, this technique will be happily received as we bid farewell to the characters, safe in the knowledge that their lives will continue without our prying eyes. It feels as though her general anxiety and disappointment in herself turns every event, whether it’s a lemon drizzle cake that didn’t rise properly, or a brush with death, into another reason why she is not good enough.

This is a beast of a book, and one that will not be universally loved. The constant repetition of the phrase ‘the fact that’ can be grating and yet at other times you almost don’t notice it. It is, however, a book that will really make you think, and is an interesting glimpse into life in America. The references may be specific but the themes are recognisably relevant to the general human experience. An interesting read, but possibly not one to pick up if you’re trying to soothe your mind from the ills of the world.

Pick up a copy:
Bookshop
Foyles
Waterstones
Posted by Ramblings of a nobody at 13:58