A Book of Secrets, Kate Morrison 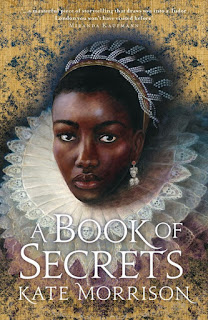 This post is part of the blog tour for the book. Thanks to Random Things Tours and Jacaranda Books for providing me with a free copy of the book in exchange for an honest review.

Susan Charlewood, born in Guinea (modern day Ghana) as Nsowah, was ripped from her homeland as a small child along with her brother and mother. During the ensuing voyage her brother was tricked and kidnapped in Seville, and so they arrive in England without him, his absence a constant source of distress. They are taken to Sussex to serve a wealthy family, and when her mother dies Susan is raised and cared for at Framfield. When the family begin to disintegrate she is sent to London to marry a printer many years her senior. She soon finds herself embroiled in Catholic plots of rebellion, faced with some difficult decisions.

Susan is a strong, intelligent character. As the book progresses we see her confidence and resolve grow, finding a place for herself in the busy and dangerous city. She feels isolated at first, feeling a distance between herself and those who have been brought to England under similar circumstances, many of whom passed through Spain and Portugal and have an understanding of these languages. She feels herself an outsider, that her skin makes people suspicious of her. At Framfield they had known her from infancy and so loved her for the person they knew. In a city full of strangers she has to overcome initial prejudice to really be seen.

The issue of race is present throughout but is woven subtly into the narrative. Her stoicism cracks at one point and she reveals a glimpse of the frustration she has felt.  ‘And how should you like it, to always be known for the colour of your skin, which is tainted by the things people choose to see in it - the devil, night, carrion birds? Your whiteness is invisible, no-one looks at you and thinks of leprosy, shrouds, ghosts and white-furred mould. I would like, just for a day, to walk around as you do without looks and stares. I would like to be so unremarkable.’ She regrets the outburst but it is a powerful passage to read. When she falls pregnant she is forced to cope with people frequently wondering how dark her baby will be ‘as if we were trying out some new recipe for syllabub rather than making a living person.’, and in a particularly cruel scene her nationality is blamed for the death of a precious child.

Her sense of identity is also explored. She remembers little to nothing of her homeland, having been removed from it at such a young age. Other characters casually dismiss her sense of kinship but she resists - she may know little of it but her culture remains important to her and her sense of self. It is painful to watch her berate herself because she doesn’t know the language or the meaning of the keepsakes she treasures from her mother. She eagerly seeks more knowledge, a deeper connection with her lost family and the heritage that she’s been denied.

Within the confines of England dangerous tension simmers between Catholics and Protestants. With Elizabeth on the throne, Catholics are forced to practice in secret, risking an agonising death if discovered. Susan and her husband John are heavily involved  in printing Catholic works yet the weight of hypocrisy essential for survival weighs heavily on John. Friends and contributors are caught and punished and he must suffer printing the gory details of their demise. Susan supports his subversive work but there are times when she must question his motives and honesty. In a world of scheming it’s hard to know who to trust and she must bear the burden of impossible decisions.

Her position is diminished by the fact she is a woman, and although at times advantageous as a cover of innocence, is frequently frustrating. She is kept in the dark and dismissed yet sees more than others realise, willing to go to extremes to protect those she loves. ‘I seemed to do nothing but wait and watch. A woman’s place, yes, but should a woman wait and watch as the sea came in until it washed her all away, or should she pick up her feet and run? I felt the tide coming for me.’ Certainly Susan is not content to wait for life to happen to her, setting out on dangerous missions in search of the truth. When a disgraced former confidante re-emerges later in life she displays a worldliness and determination that surprises her adversaries.

This is a stunning debut - evocative and richly descriptive, it will transport you to the chaos of Tudor London. Morrison deals sensitively with themes of loss and grief and reveals a side of history that is often obscured. With a strong female protagonist and villains that will make your blood boil, this is a hard book to put down.

For more information on the research and history that went into the book head over to The Brown Brontë blog for a fascinating interview with the author. 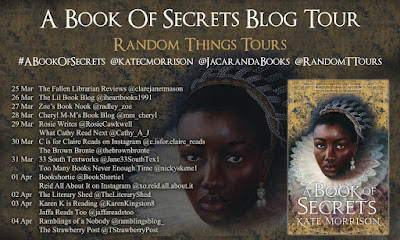