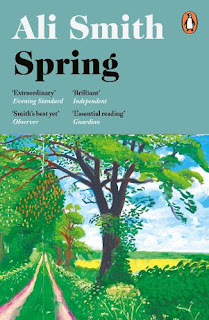 The third in Smith’s seasonal quartet introduces us to Richard, ‘Doubledick’ as he’s affectionately known to his dear friend Paddy, who has recently died. He’s making his way to Scotland as a reaction to his grief, and interacting with his imaginary daughter in his head. We see scenes of him and Paddy together and her sons who act as gatekeepers. It is clear that she has had a profound effect on not just his professional life but his internal one too. Their relationship and affection for each other is touching to read. You become wrapped up in their lives and those of Katherine Mansfield and Rainer Maria Rilke, the subjects of a project Richard has been somewhat reluctantly working on.

The narrative is then interrupted with the introduction of Brit, an employee at an Immigration Removal Centre (IRC), who has learnt to dissociate from the terrible treatment she witnesses and enables every day. Enter Florence, a mystical figure in the shape of a twelve year old girl who manages to walk straight past security guards, onto trains with no ticket, and into dangerous settings, emerging unscathed. She has an uncanny ability to get people to do what she wants, initially causing wonder at the IRC when she persuades them to give the toilets a deep clean (which will also give an idea of the shocking conditions described at the Centre).

The lives of these three characters intertwine briefly in Scotland in a way that feels natural and unforced. Florence helps Richard to see things in a new light, as well as opening discussions with Brit about what she does and how it intersects with the trauma of the detainees. Brit has not entirely succeeded in closing her heart to humanity, or at least not enough to have assuaged any guilt she feels. She is defensive yet privately acknowledges that within her first two months in the job she knew something terrible was happening. By the end of the novel she will have made a decision that clarifies whether or not there is hope of redemption for her.

The use of a child as the moral compass of the novel serves several purposes - her story is heartbreaking, although she doesn’t reveal the full extent of it, and her youth makes it that bit more hard-hitting. Her ability to see and understand what adults cannot, or choose not, to see holds us all to account, as well as highlighting the rise of children’s activism in recent years. There are short sections throughout lifted from Florence’s notebook on topics such as the post-truth world, the commodification of humans by big tech companies, and the dehumanising of refugees. Small bullets of truth that will stop you in your tracks. These aren’t new discoveries, but they are situations that we should never allow ourselves to become numb to, and novels such as this help remind us all of this.

Considering the past year, I felt somewhat apprehensive about opening this book, despite having enjoyed the previous two. Would the concerns that weighed so heavily in 2019 feel like old news in the light of the pandemic? Are they old wounds that are too painful to reopen? The answer is no, and not just because they’re issues that haven’t gone away, but because in Smith’s skilful hands you are there one hundred percent. Her writing is so thoughtfully constructed, so full of observation not only of current affairs but of the intricacies of the human heart, that you can’t help but be swept up in it. This is a deeply affecting novel, both in the beautiful friendship and devastating loss of Paddy and Richard, and in the horrors revealed about a system that mistreats people to such an appalling extent that it is said to be worse than anything they have been through before. Smith has once again crafted an awe-inspiring feat of literary prowess that will grab hold of your heart and mind from the first page to the very last line.