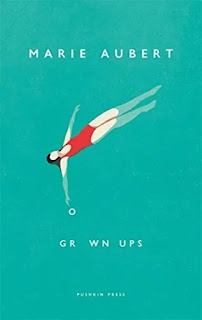 Thanks to Pushkin Press for providing me with a free review copy of the book in exchange for an honest review.

We meet Ida on the way to her family’s cabin to celebrate her mother’s 65th birthday. In the opening sections we see her frustrated by a child on the bus playing with an iPad at full volume, and later interacting with Olea, her sister Marthe’s step-daughter. In these interactions we see how important it is to her that she knows how to behave around children. Marthe is three years into trying to get pregnant and the topic has dominated conversations during that period. Ida, single and 40, has quietly started the process of potentially freezing her eggs, believing that it might be the first step toward the life she wants. The birthday celebrations are overshadowed by the news that Marthe is in the early stages of pregnancy, and the sibling fallout that ensues.

The relationship between Marthe and Ida is fraught with jealousy and misconceptions. Ida finds her sister’s relentless complaints difficult to stomach when she has everything Ida doesn’t. On the other hand, we see that throughout life Ida has generally been considered the more attractive, more successful sibling. Marthe suffers from Crohn’s Disease and her health has often put limits on what she’s able to do. Their mother always prioritised taking care of her, leaving Ida craving the kind of attention and care she sees Marthe receive. There is a sense that her achievements and struggles fell to the wayside while Marthe was coddled and anxiously cared for.

Ida’s behaviour toward her sister is often less than admirable, constantly undermining her with Olea, taking pleasure in problems she caused but which Marthe appears responsible for. She is jealous and spiteful and struggles with the idea of her sister ‘overtaking’ her. She’s so used to consoling her that she’s not sure how to navigate their relationship when things go well for Marthe.

The way Ida is treated by her family is also often far from fair. They sideline her and fail to consider her feelings. When Ida opens up about her attempt to freeze her eggs it is a short conversation and no concessions are made to take into consideration the fact baby talk might be a sensitive subject for her.

Outside of the family circle Ida admits to feeling invisible. Her friends’ lives seem to expand and grow whereas hers remains much the same. She fears that she may have decades of the same ahead of her. Ida may not always come across as likeable but her insecurities are clear, and the way in which society views women of a certain age that aren’t settled down with a family have become internalised. Her desperation for companionship often leads her to make rash decisions and become clingy, choosing men who are unavailable or unwilling to consider a serious relationship with her.

This is a short book but one that manages to capture the essence of a family dynamic that will be familiar to many. All the characters have their imperfections and know how to hurt each other. The short passages showing their past are revealing as to how they became the people they are. We see where their insecurities come from and understand how this feeds into their need for reassurance. They feel very real, as messy and contradictory as anyone you’ll meet in real life. A brilliant examination of a grown-up family that draws on wider societal concerns to add an extra layer to their pre-occupations.