Scott-Land: The Man Who Invented A Nation, Stuart Kelly 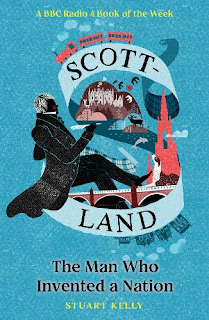 This interesting book looks at the life of Walter Scott, his impact on the prevailing image of Scotland, and Kelly’s own relationship with ‘the Great Unknown’. This is not straightforward literary biography, but instead something more difficult to define. He guides us through the rise of Scott’s popularity and descent into derision and obscurity. His legacy naturally gets a lot of attention, and readers, whether familiar with Scott’s novels or not, will leave with a greater understanding and fascination with this eccentric author whose work provides us with so many of our ideas of Scottish tradition and whose influence should not be forgotten.

Scott not only created a version of Scotland and Scottish history that did not exist, but also attempted to create some mystique around himself as author. ‘It is as if, in the process of converting Scotland into an imaginary place, Scott had to make himself into an imaginary author.’ For many years he continued with the ruse that he wasn’t the author of the Waverley novels, going as far as to review one of his own books negatively, and determinedly persisting with the delusion despite his identity being an open secret. Indeed, he seemed to imagine himself a different reality at several points throughout his life. When he was met with financial ruin it made no practical sense to declare bankruptcy, yet he framed this as an act of heroism. It is perhaps not surprising then that Abbotsford, the home he created, is formed of clashing and contrasting styles that somehow held together while he was living but lost its soul with his parting, leaving modern visitors with a feeling of disconnect and unease.

It is perhaps ironic that the man who did so much to build the mythos of Scotland has had such a troubled legacy himself. A bestselling author during his lifetime, hailed by the Victorians as rivalling Shakespeare (or at least their idea of him) in significance, he is now largely neglected except for the most devoted of fans. Even his memorial in Edinburgh, the largest to an author in the world, was plagued with problems from the start, with the untimely death of the architect years before its completion, and an unfortunate material choice that meant it looked time worn when new.

His impact on Scottish tradition was helped along in no small part by royalty. His co-ordination of George IV’s visit to Edinburgh popularised a new, false sense of tradition that was derided at the time yet remains firmly in place today. Queen Victoria and Prince Albert also enthusiastically adopted his vision of Scotland in their time at Balmoral, from the design of the building to their patronage of the highland games and penchant for tartan.

Scott’s name will live on in street names, railway stations, and schools, and in this entertaining book Kelly takes us on a journey with one who went in search of the man behind the name. The character that emerges is one of contradiction, a nationalist unionist, a great yet shallow writer, forgotten yet commemorated across Scotland. Kelly does not shy away from Scott’s failings yet offers a compelling case for getting to know ‘the Great Unknown’.