Not long after having arrived in Australia I found myself learning how to handle an automatic and navigating Sydney city centre. This is one thing that amazed me until the day I left – everybody seems to have a car, and drive through the centre of Sydney without a second thought. How different to London where most feel driving to be unnecessary, and for those that do, venturing into the heart of the capital by road is almost unthinkable. A brief drive to pick up my fellow road trippers and we were heading out of the city to make our leisurely way to Canberra.

Barely had we left when the roads began to empty and the houses became infrequent. We stopped in historic Berrima for some lunch. At first it felt as though the town was closed, the first few eateries we tried either being shut entirely or having stopped serving. This turned out to be fortuitous however as we ended up in Gumnut Patisserie. We hadn’t expected to find more than a few pies on offer but were greeted with a wide range of beautifully crafted patisserie that wouldn’t have looked out of place in a French patisserie. Having sampled some of their delicious savouries and sweet offerings we went happily on our way. Leaving with pleasant opinions of the place, on further inspection I fear we may have done the town a disservice. It is widely recognized as Australia’s best preserved example of a Georgian village on the mainland, and had we lingered longer I’m sure we would have discovered many more treasures.

Our next stop was the Big Merino, a 50ft concrete construct, and one of over 150 ‘big things’ dotted around the country as eccentric quirks standing out from the landscape. Originally opened in 1985 but moved in 2007 to capture the attention of more tourists it now sits beside a petrol station and McDonalds. Within there is an exhibition on the history and uses of merino wool and you can climb to the top to look out of the eyes of Rambo, as he is affectionately known. The rest of the structure is taken up with a gift shop selling you average souvenirs, merino clothing, and some merino wool yarn and knitting patterns, which naturally I couldn’t resist.

The final landmark before entering Canberra was Lake George, which admittedly did challenge my idea of a lake, being completely devoid of water. This, in part, is what makes it famous, its constantly shifting water level as well as its location making it one of the most studied lakes in Australia. It may not have had the vast expanse of water I was expecting, but a lookout point on its perimeter proved the perfect spot for some stargazing.

We arrived in Canberra after dark so didn’t see much of it on our way in, however, we did dine by the water, which wasn’t a bad introduction. With the rising sun we went to experience the city by daylight. I had heard that it’s a very green city, but nothing had prepared me for the surrounding mountains, and how much it just didn’t feel like a city. In fairness, we didn’t really explore the centre, but I’m reliably informed that there isn’t really one. Instead, we headed for the mountains and Mount Stromlo Observatory. The original observatory was destroyed in the bush fires of 2003, and as you approach you pass the burnt out shells of the previous buildings. It makes you stop in your tracks and ruminate on the haunting remains. It’s not otherwise somewhere that you’d spend a long time, although I imagine in summer it would make a beautiful picnic spot, and I believe there are a number of walking and cycle tracks in the surrounding area. Inside the visitor centre is a small exhibition and a café with gorgeous views, which seemed to be why most people were there.

Our next stop was Canberra’s Deep Space Communication Complex, part of NASA’s Deep Space Network. The exhibition space here is larger and has several interactive displays to keep visitors of all ages entertained. You can see the large antennas across the site and there are boards in the exhibition with details of what they are tracking. We were even lucky enough to see one of them move. 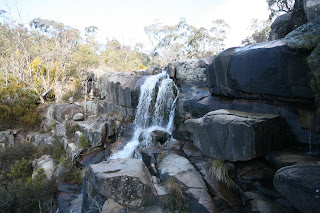 After a short time we were back on the road again and heading for Corin Forest, a mountain recreation resort. There was no natural snow on the mountains but they have a snow play area so icy fun can be had even when the weather doesn’t oblige. After a snowball fight or two it’s pleasant to warm up again next to the open fire in the visitor centre. It wasn’t as forest like as the name suggests but a great place for a family outing. This is also where we saw our first kangaroos of the trip, which definitely made it worth it. Slightly further down the road was a short walking track leading to a waterfall which is well worth a look.

Our trip to Canberra was short but sweet and far more scenic than I had previously imagined.
Posted by Ramblings of a nobody at 02:22