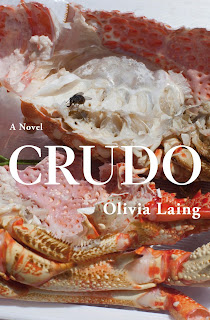 Written over seven weeks in 2017, Crudo is a chaotic account of a tumultuous summer. The protagonist, Kathy, is getting married but thoughts of her upcoming nuptials fill her mind far less than the reporting of both the serious and the trivial on Twitter. The opening, ‘Kathy, by which I mean I, was getting married,’ immediately lets us know there’ll be an interplay between the lives of the author and Kathy and that this persona won’t be entirely reliable or trustworthy. We are told later that Kathy often lies and so we often approach the tale with wariness. Sadly, the politics which often seem absurd are all too real. ‘… they were like stupid boys at school except killing people and in government, it wasn’t a great moment in history, she still couldn’t quite grasp how it had all come about.’ We can relate to her disbelief at the apparent crumbling of the world as we know it.

Kathy is an interesting character for a number of reasons. Based partly on the life of Kathy Acker, the experimental author who died in 1997, and drawing on Laing’s own experiences, she is complex and compelling. The reader may be taken aback when in the same breath that she tells us she’s getting married we hear that she also has a boyfriend. As the novel progresses so does Kathy’s self-awareness on her attitude to relationships. She loves her husband but also requires solitude, realizing that she has previously chosen aloof and distant partners precisely because they afforded her the freedom she craves. Her feelings can sometimes come across as callous, ‘her husband’s sad eyes upset her but also infuriated her, she detested being responsible for anyone else’s happiness.’ yet at the same time it is refreshing to see such honesty in the difficult transition that requires more selflessness and compassion than she has previously been able to obtain. Perhaps these feelings are also rooted in a doubt in her own ability to provide what is needed by those made dependent on her in love.

Rarely is a book so completely rooted in time. The obsessive checking of social media to see the latest crisis unfold, the underlying desire to protect the environment with the sad lack of real action, and the general sense of unease and dread all ring true. Laing has spoken of her desire to record the chaos of the time that will be lost in historic narratives where a sense of logic and intelligibility will be imposed on a period that had none for those living through it. In many ways a painful read as events continue to hurtle toward as yet untold disasters. The juxtaposition of the wider concerns of the world with one woman’s own self-discovery makes this a captivating read.
Posted by Ramblings of a nobody at 12:00