We of the Never-Never, Jeannie Gunn 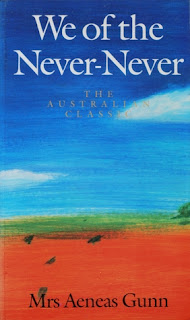 In 1902 Jeannie Gunn, a teacher from Melbourne, moved with her husband Aeneas to Elsey in the Northern Territory. We of the Never-Never is an account of her year there. Her friends at home tried to dissuade her from going and the locals were less than keen to have a woman there, but with time her expectations changed and she threw herself into bush life, making friends and earning the respect of the indigenous people that educated her on the ways of life in the bush.

The tale is not one of high adventure but everyday life in a harsh landscape. The postman visits eight times a year and Gunn is impressed by his endless good humour and punctuality despite the hardships of his job – his predecessor died on his route. The way in which humans are beholden to the land, becoming trapped by the Wet or Dry alternately, is made abundantly clear. The misunderstanding of life in the bush by those in the South is commented on. They wonder how bush-folk fill their time little understanding the challenges of survival and the beauty of life there. ‘Speed’s the thing,’ cries the world, and speeds on, gaining little but speed; and we bush-folk travel our sixty miles [in three days] and gain all that is worth gaining – except speed.’

Having been written at the start of the twentieth century some of the language used can be offensive to modern readers, but there is a glimmer of modernity in her comments on the hypocrisy of colonialists who criticize the violence of the indigenous people while taking their land by force, not to mention the way in which they treated the captives brought with them.

An enlightening read on a way of life so different to that of a city dweller. Gunn is honest in her tales, including moments where she is laughed at and being open about how unprepared she was. During her year in Elsey she comes to have great affection for the land and its people and although I can’t help wondering if the locals would really have agreed with her including herself in ‘us bush-folk’ having spent only one year there, it nonetheless aids in telling stories that would otherwise go untold.

Pick up a copy:
Foyles
Waterstones
Posted by Ramblings of a nobody at 12:03