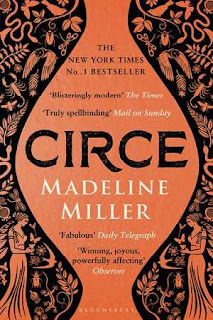 In Madeline Miller’s latest reimagining she takes Circe, daughter of the sun god Helios, a character who fills only a few lines of Homer’s The Odyssey and puts her centre stage. An outcast among the gods for not being beautiful enough and the misfortune of having a mortal voice, she finds peace in her island of exile, Aiaia, but only when the gods allow it. Through her story we meet many famous characters – Scylla, Odysseus, Jason, and the minotaur birthed by her sister. Her story is in many ways a sad one but also one in which she proves her resilience and power.

Her separation from other divine beings gives her an appreciation of mortal values. She comments that they have to work hard to hone their skills but because gods are born with excellence they instead work on proving what they can destroy. They do not have empathy as mortals do, yet Circe does show some. Early on we witness the punishment of Prometheus, Circe alone takes pity on him. Penelope comments that Odysseus told her ‘that he had never met a god who enjoyed their divinity less.’ Her views on the division of mortals and gods is forged in her youth as she is rejected and abused by her kin, reinforced by her transformation of Glaucos from mortal to god and his simultaneous loss of love for her. At a number of points she seems to yearn for mortality. She envies the way mortal bodies have their history written on them, and that part of them doesn’t die but lives forever in the underworld, where she can never go. She shows us a different side to divinity and she is made to be more relatable to the reader.

The other main theme is that of the position of women. Even goddesses are seen as lesser beings. When nymphs are sent to Aiaia as punishment Circe reflects that having misbehaving daughters sent to her is preferable to sons, swiftly followed by the truth that it never would have been sons, as they are not punished. It is not merely moral expectation that is different but for females there is a very real risk of assault. Hermes jokes with her that nymphs always run screaming when he tries to take them to bed but that they are terrible at getting away. When sailors come to the island and realise she is alone, despite her power they try to rape her and hope to steal from her. This experience makes her more vengeful, turning dishonest men into pigs. In this way she takes back some control, although she acknowledges that she is always under the dominion of the gods.

Circe's story is told to us as a first person narrative and we experience the heartache and desire for control as her life goes through its many turmoils. At times it is hard to remember that the story unfurls over centuries, but unlike many of the other gods she seems develop emotionally over the years, making her a far more interesting protagonist. Not perhaps as gripping as I’d imagined it might be, nonetheless an interesting read that makes you think again about the mythology we’re taught in our youth.
Posted by Ramblings of a nobody at 12:00