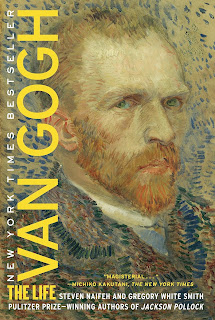 Vincent van Gogh is today one of the world’s most beloved artists. His distinctive style is instantly recognizable and the legend that has built up around his life and death promote the idea of him as a tortured genius. This epic biography paints a more balanced picture, focusing not just on the final few dramatic years of his life in which he painted many of his most iconic pictures. Instead, the reader is taken through a detailed account of his whole life – his struggles and failures, obsessions and hopes. At times it is difficult to read the harsh realities of a troubled life.

From his early years he longed for close familial relations, something that remained largely absent throughout his life. His strained relationship with his parents and the circumstances around his father’s death meant an icy reception for their wayward son. His brother Theo often took the role of peacemaker. His relationship with Theo was arguably the most significant of his life but was also fraught with difficulty. Theo financially supported his brother for most of his adult life and suffered social exclusion when he came to live with him in Paris. Vincent seems to have swung between a sense of entitlement and deep feelings of guilt for the burden he knew he was to his brother. The passages describing some of their interactions show behaviour that is nothing short of abusive and is incredibly hard to read. Despite their difficulties, Theo continued to champion Vincent and hope for success in his endeavours.

Vincent emerges as unlikable at times but often as childishly innocent, longing for acceptance and a family home. He travelled around a fair amount and would dream of Theo joining him. His preparations of the Yellow House for Gauguin’s arrival are endearing but the reader is left with a sense of dread knowing his hopes will once more be dashed with disappointment.

He was an outcast wherever he went, people finding his intense painting style alarming and his disheveled appearance a point of mockery. It is this rejection by society that defined his life. He enrolled in art school on a number of occasions but inevitably dropped out due to his unwillingness or inability to follow instruction. His first taste of potential success appeared mere months before his death thanks to the championing of Albert Aurier, a young art critic, but he was sadly not well enough to enjoy it.

Naifeh and Smith rarely speculate throughout, relying on documentary evidence to trace the tumultuous life of Van Gogh. They do not attempt to diagnosis his ailments but merely report on his medical record, explaining the context and medical developments that were happening at the time of his treatment. One point on which they do object however, is the myth of his untimely death. In an appendix that details the evidence that led to their conclusion and the flaws in sources for the alternative, they offer a reasoned debate. This part of the book did not go down well with many in the art world however, and they were accused of having included it purely for the publicity it inevitably created around publication.

A comprehensive, well researched biography that is easy to read thanks to its lively and smooth prose. The wider artistic and cultural conditions of the day are brought to life, situating Van Gogh very much in his time. If you want to know more about the man behind the legend then this is a great place to start.

Further resources can be found at http://vangoghbiography.com/ and scans and transcripts of Van Gogh’s letters can be viewed on http://vangoghletters.org/vg/
Posted by Ramblings of a nobody at 16:28