The Turn of the Screw, Henry James 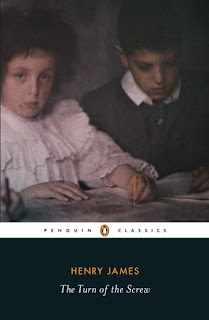 James’s most famous ghost story is set in a remote house with a small cast of characters. A young governess has recently joined the household and although at first believes it to be an idyllic post, she soon finds herself entangled in a terrible tale. She begins to see ghostly figures around the estate that resemble previous employees who are recently deceased. The two children in her care are well behaved and beautiful but she soon comes to believe they are in league with the ghosts, leading to a tragic attempt to protect them.

The novel is told in first person narrative by the governess (except for the opening which merely introduces the account that follows). We see in her a woman who takes on far more than she can manage in a futile attempt to please her employer, who remains absent throughout. Seeing events unfold through her eyes we are led to understand how she came to her conclusions yet critics have been divided over whether or not the ghosts are real or if she is descending into madness. James’s careful ambiguity has allowed this debate to rage for decades and it is ultimately a question that will remain forever unanswered. Whichever way you read it, it is clear that you cannot take the narrative as absolute truth.

The first appearance of the ghost peering in through the window is truly unsettling and as the story progresses the governess fabricates an internal life for them, imagining their purpose and beliefs despite them never speaking a word or indicating any intention to do harm. Is she allowing her paranoia and imagination to run away from her? Rumours of the actions of both the previous employees hang over the governess and contribute to her belief that their presence will end in harm.

The children have moments of playing up which she believes is a result of ghostly interference, causing a strong reaction in her. The children are unsurprisingly unnerved by the seemingly erratic, extreme responses of their governess. Is she acting in selfless defence of her charges, wishing to be the hero of their story, or are her own delusions causing their strange behaviour?

An atmospheric read that will send shivers down your spine. Whether character study or ghost story, it is an intriguing tale and a sinister one at that. A book that stands up well to a re-read, especially when considering the opposing interpretations.

Pick up a copy:
Bookshop
Foyles
Waterstones
Posted by Ramblings of a nobody at 15:17