On the Bright Side: The New Secret Diary of Hendrik Groen, 85 Years Old 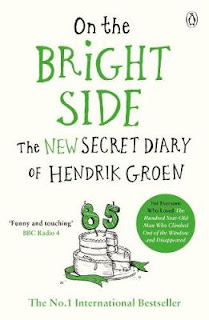 After taking a year off from diary writing, Hendrik Groen is back with his amusing observations and deeply felt musings on some of life’s big questions. The Old-But-Not Dead Club are still going strong, although they have to come to terms with the need to recruit new members as their number inevitably dwindles. Hendrik stoically makes the best of his twilight years while also planning for his end.

He continues to mock the behaviour of certain of his fellow residents while admitting to finding himself falling into some of the same traps. There have been changes to the criteria for taking in new residents, meaning a steady increase in the average age and infirmity, making life more depressing for those still wanting to exercise their minds. Despite the emotional difficulty of the experience he continues to visit a dear friend in the closed ward. Grietje herself is always in good spirits but the other patients make for a sorry sight. ‘I can’t bear having to see the humiliation of it, and the helplessness.’ He perseveres nonetheless, proving himself to be a good friend.

Along with dwindling resident numbers they also have to contend with a change in director, who quickly proves to be no more amenable than their predecessor. The Old-But-Not-Dead Club pull off a political coup in dominating membership of the Residents’ Committee but have a fight on their hands when attempts are made to sideline their responsibility exclusively to social events. Hendrik offers some insightful thoughts on the running of the home, observing that many of the residents behave like children because they are treated as such. When considering why the garden is kept locked in winter and surmising that it’s probably because they don’t want responsibility for any residents freezing to death he offers this gem of wisdom – ‘There’s a big difference between wanting to be in charge, and wanting the responsibility.’ The book is littered with these moments of clarity amidst the humour and daily updates.

Toward the end of the year he begins to struggle to keep his spirits up and highlights the importance of good friends lifting you up when needed, refusing to allow the lethargy to set in. Determined to keep trying new things and not let inaction settle in their lives, the Old-But-Not-Dead Club make life worth living.

This sequel maintains the humour and entertaining characters from the first book but allows a little more space for dwelling on the challenges of life. This is balanced by yet more ambitious Club outings and hilarious accounts of their adventures. A wonderful book about growing older but with messages that are relevant at any age.

Pick up a copy: Foyles Waterstones