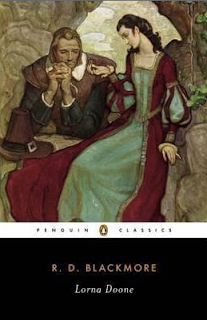 Published in 1869 and set in the seventeenth century, Lorna Doone is Blackmore’s most famous book, and the only of his once popular novels that is still readily available. It tells the story of John Ridd, an Exmoor yeoman, and his love for Lorna Doone. The name Doone is met with fear and disgust by the locals, having been terrorized by them for years, they even killed John’s father. Lorna, however, rejects their way of life and wishes for the freedom to be with John despite other plans being firmly in place to keep her within the Doone family.

John narrates the tale, although does at one point pass the narrative over to Lorna. He speaks directly to the reader at times, giving glimpses of what his future looks like as well as little asides on his views and opinions which are not always endearing to the modern reader. He is however largely portrayed as kindly if a little vain and you do find yourself hoping that things turn out well for him.

It may be Lorna’s name on the title page but she is not often part of the action, being in large part the greatest dream of John’s heart, who is utterly enchanted from their first meeting. Some readers accuse her of being weak and overly compliant yet there are glimmers of strength within. For example, she tells John that the Doones are ashamed of their villainy in front of her. She must therefore have expressed her distaste for their behaviour, to hold some kind of power over her manipulative and uncaring relatives is no small feat. She is also resilient, growing up in violent surroundings with very little love shown to her, and then trying to fit into the Ridd family when there is a certain level of distance due to her social standing.

The novel is rich in descriptive detail and the landscape is brought to life in much the same way you find in a Hardy novel. Indeed, one of the reasons the local community turn against the Doones, aside from their violence and thievery, is the way they misuse their land. In many ways this is a moral tale, but one in which people are easily forgiven if they exhibit signs of kindness. ‘Everybody cursed the Doones, who lived apart disdainfully. But all good people like Mr Faggus – when he had not robbed them – and many a poor sick man or woman blessed him for other people’s money…’ Mr Faggus is a highwayman, but his involvement in the community and the occasional kind action allow him to be embraced by the very people who may well be his next victim.

This is a long book that could likely have been cut down while still retaining its appeal. For the moments where it drags however there are many more where you become completely absorbed in the story and the writing, which at times feels almost poetic. The Doones are brilliantly drawn villains and never fail to live up to their reputation. There are moments when the tale seems to go off on a tangent and you’re left wondering quite how you got there. Nonetheless, this is a great read with a dramatic, violent climax.