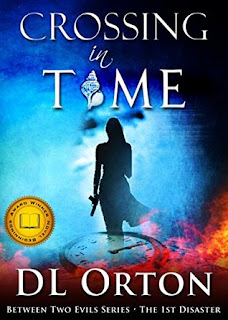 This post contains affiliate links. If you click through and buy I will receive a percentage commission at no extra cost to you.
This post is part of the ultimate blog tour for the novel. Thanks to the publishers and The Write Reads for providing me with a review copy of the audiobook.
Isabel and Diego’s relationship takes centre stage in this light sci-fi novel. They live through a time of huge global difficulty, nuclear war threatens and a deadly disease is spreading fast. It becomes clear that going back in time to mend their broken relationship is the only way to save humanity, even if it means risking their own lives. With both characters unreachable in different times and places, will they be able to save the day and find their way back to each other?

From the first time we see them together, in a chance meeting after years apart, we see how their relationship crumbled. Isabel blames Diego for letting her go after she had an affair, taking little responsibility for her own mistakes. When she goes back in time and meets a younger Diego who hasn’t met her yet, she spends her time lecturing him on how to put up with her own problems and inconsistencies, putting all the emphasis on his behaviour. In many ways she doesn’t come across as particularly likeable but the experience does at least teach her to see their past in a new light. Despite their problems, there is an undeniable attraction between them that always draws them together, whether it works out or not.

A recurring theme throughout is Isabel’s relation to men and their attempts at dominance and violence against her. From the opening, a dystopian world in which people are trading laptops for food and in which she has reluctantly come to realise she needs a gun, the men she interacts with all seem to have one thing on their mind, and they are a threat to her. Later, when she is alone and vulnerable, an anonymous attacker attempts to rape her, and, in a different way, her ex-husband tries to maintain dominion over her. He uses his position to force her hand in terms of her work and manoeuvres the situation so that she has to hand over all her research. Perhaps this goes some way to explain why she is so demanding of Diego, she sees it as a relationship she has some control over.

A sci-fi novel might seem like a good source of escapism at the moment, but there are certain parallels that are a bit too close to the real world at the moment. There are some brief mentions of climate change and the need to act, but more so is the pandemic rapidly spreading and the desperate hunt for a vaccine that hasn’t been corrupted. There are throwaway remarks about the possibility of shortages of supplies such as flour and toilet roll, the weak and incompetent leaders delivering the response, and the impact this will have on international relations as well as civil unrest. Everyone is also told to stay home yet many ignore the advice. This was an unexpected aspect of the book and it was strange seeing our own world mirrored so closely in fiction.

Overall, an average read - the plot doesn’t entirely make sense the whole time and the characters aren’t ones you particularly root for. Isabel is blind to her own faults and Diego speaks largely in platitudes and puns. There’s a lot of work around developing their relationship so if you’re after a fast-paced sci-fi adventure then this is probably not the book for you. The most successful aspects are the most human – the grief, the reaction to a broken relationship you can’t move on from, and the little quirks only one who loves you would notice add a sense of reality to the characters. The first in a series, there’s still a lot more to be uncovered.

Email ThisBlogThis!Share to TwitterShare to FacebookShare to Pinterest
Labels: romance