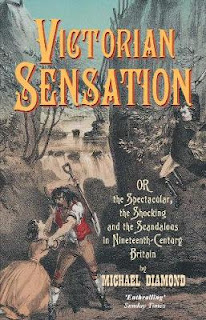 In the mid-nineteenth century a number of factors came together that made the spread of scandal much easier. Newspapers became cheaper with the removal of taxes, meaning that a much wider readership were able to afford them. The opening of the Divorce Court in 1858 also offered a new source of scandal - court proceedings included personal details that newspapers would not have been able to print. Diamond, in an attempt to show that the Victorians were not all that different to us, walks us through some of the popular scandals of the time.

There are some famous occurrences that modern readers will be familiar with, such as the Jack the Ripper murders, but Diamond doesn’t dwell too long on these and there’s a wealth of other sensations that the common reader will likely not have come across before. The Tichborne Case, for example, captured the public imagination. Roger Tichborne, heir to title and fortune, was presumed dead after being involved in a shipwreck in 1854. His mother believed there was a chance he was still alive and advertised widely, offering a reward for information. An Australian butcher saw the advert and made his way to England to claim his position as the lost son. Some were happy to accept him whereas others were more sceptical. The court case that ensued was the longest on record. It became a huge rallying point for the public who remained firmly on the side of the Claimant, despite evidence suggesting he was not the Tichborne heir.

Diamond sets each scandal within its social and political context and reveals patterns in some of the deeds and defences. He also reminds us that Britain was less revolutionary than its continental neighbours, and that events considered sensational would not have been elsewhere. He discusses the role of celebrity, both in the context of crime, and entertainment. Oscar Wilde had very deliberately created a public persona for himself, but this made his fall from grace that much more severe, and his every move was tracked. Diamond closes with a discussion of P.T. Barnum, the great showman, and his focus on creating spectacle and sensation. He seemed to believe in the oft-repeated phrase ‘all publicity is good publicity’, and had huge success despite causing outrage in some circles. ‘Barnum, an impressario not a performer, had become a star in his own right, and gives a lesson in how to create sensations through size, planning, advertising, and razzmatazz. … Barnum had led the way into the twentieth century.’

This is an accessible book that helps to break down the commonly held view of Victorians as prim and proper with very rigid morals. The popularity of sensation novels and dramas show the huge appetite for such tales. He guides us through the real life events that inspired fiction and the response to these forms of entertainment. He writes also of the role of women’s writing and strong female characters that dominated the genre. The book offers a glimpse into the subjects that titillated and shocked, and the laws that made them possible. There was a fascination with poison as a means of murder, and we learn that arsenic could be freely sold without a licence, whereas items such as tea and coffee, which we consider every day essentials, could not. This is a great read for those who want to dive into the world of Victorian reporting and entertainment, offering summaries and context for a broad range of events. Diamond sets them firmly in their time while allowing us to see that the subjects that capture public interest haven’t changed all that much in the intervening years.

Pick up a copy:
Bookshop

Posted by Ramblings of a nobody at 13:41