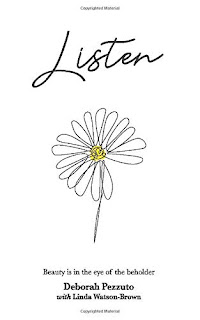 This post is part of the blog tour for the memoir. Thanks to Random Things Tours and the author for providing me with a free copy of the book in exchange for an honest review.

Pezzuto and her husband Alessandro had a difficult journey to parenthood. Initially they went through the anxiety and uncertainty involved in the adoption process, eventually bringing their daughter Keisha home. Knowing that they wanted a sibling for her, they endured the physically and emotionally draining experience of IVF. When, finally, they were able to become pregnant with an egg donor, they were overjoyed at the thought of expanding their family. Their twins, Dylan and Zack, were born profoundly deaf and so their arrival was not the joyous occasion they had dreamed of.

Pezzuto is honest about the heartache they felt at the diagnosis and her fear that they would be discriminated against for being different. She was completely committed to giving them the best chance in life, regularly travelling from Mexico City to New York for therapy. She describes how their therapy became an obsession for her and how it completely changed her priorities, previously having been incredibly career driven. Alessandro is largely absent during the first year due to the constant fear of losing his job and the medical insurance that came with it. She talks of the strain the absence and exhaustion took on the relationship, yet admits she would always have wanted to be the one looking after them and leading on their treatment. She speaks also of many wonderful professionals that helped them along the way, a heartening display of those in the health service genuinely caring about the outcomes for those who fall under their care. Pezzuto is a great advocate for the work they do and the strength they find to support families such as hers.

As their children grow and they move as a family to the UK for the provision of therapy and schooling, she begins to reassess her role now that she is no longer depended on for everything. It is during this time that she begins to meditate on the role of women and motherhood in the modern world. She comments that often a mother will know there is something wrong with their child but that their concerns are brushed aside. ‘Women are silenced in this, as they have been in so many things throughout history. It is ironic that even when they are fulfilling the role that many cultures believe is their only role, they are still ignored or brushed aside.’ Her situation had its own unique challenges but she acknowledges that she is not alone in her struggles. ‘I was in my bubble, but I could still see out, I could still see other women who were struggling just as much, even if it was with other things. I realised just how many of us see looking after ourselves as an indulgence, when actually it should be our priority.’

This is a moving and ultimately uplifting book that reveals the many complex difficulties parents and couples can face. Pezzuto does not hide behind positive affirmations nor does she rose tint her experience. Writing the book at a time when her family circumstances had improved, naturally affords a more positive outlook but the exhaustion and personal neglect are described in great detail, as well as how her and Alessandro found their way back to themselves. There are messages within about the importance of self-care and commitment that offer positive advice to all who read it no matter their individual circumstances. 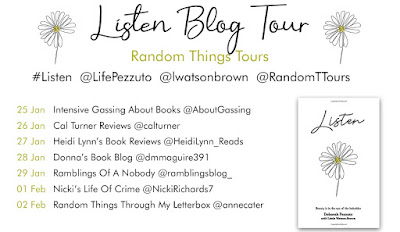