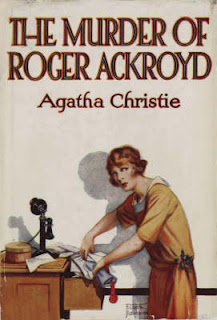 The novel opens not with the the death of Roger Ackroyd as you might expect, but with the suspected suicide of Mrs Ferrars. Her death is quickly swept aside however when Ackroyd is discovered dead in his study, a fatal stab wound to his neck. They’re not entirely unconnected, the two victims having been lovers, Ackroyd receives a letter revealing the blackmailer that led to her death on the night of his own demise. Our narrator, Dr James Sheppard, was present when the letter arrived and witnessed first hand the uneasiness of Ackroyd, anxiously asking him to check that his window is locked. In the story that follows, world renowned detective Hercule Poirot comes out of retirement to investigate, and all those with a connection to Ackroyd appear to have a motive. Sheppard acts in the role of assistant and is constantly confused by Poirot’s methods.

Christie masterfully portrays her characters, Sheppard’s sister Caroline is introduced in the early pages of the book and her profile immediately gives you a sense of her. She has an uncanny ability to find out what’s happening in the lives of her neighbours without ever having to leave the house, and frustrates her brother by constantly knowing more than him. Poirot too offers some light relief, being introduced in a marrow throwing incident. He has his little eccentricities and although willing to share his discoveries, he keeps his conclusions to himself until the end.

Sheppard’s account remains as impartial as possible, Poirot commenting on his diligence in his note making when shared, but noting also that he modestly writes himself out of the narrative. There are moments where Sheppard can be a slightly frustrating narrator, seemingly so trusting of those involved that even the most suspicious behaviours barely make an impression.

Poirot carefully uncovers the secrets of each suspect, explaining away their motives with reason and fact. All these small reveals keep you hooked throughout, but as some characters barely feature it is occasionally hard to muster enthusiasm for the truth behind their deceptions, yet the final revelation will leave you flabbergasted. The reader is given enough information to deduce the solution, but I found myself quashing my suspicions when I’d landed on the truth, unable to believe it could be true. I’d be interested in re-reading the novel knowing the conclusion to fully appreciate the clever storytelling that obscures the truth until the appropriate moment.

Christie weaves a complex web of intrigue that will make you constantly question your assumptions. A good cosy murder mystery with a dubious host of characters, perfect for the long winter nights.