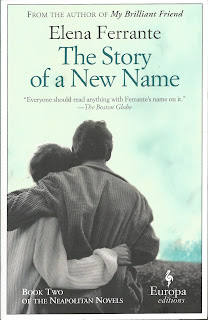 The second of Ferrante’s scintillating Neapolitan Novels picks up from the close of My Brilliant Friend, Lila and Stefano’s wedding. Elena, our narrator, explains that she has access to Lila’s inner thoughts from this time in the form of a series of notebooks which she refers to throughout, showing how her perceptions at the time often didn’t align with what was being experienced by Lila. She has been entrusted with these diaries but callously destroys them. We are thrown straight back in to the complex, destructive friendship between these two young women. Throughout the book their lives diverge, creating a distance between them. Lila’s life shrinks as she comes to terms with life as a wife while Elena continues to study and even has the opportunity to leave Naples.

Their friendship is truly the heart of the novel, and although they care deeply for each other and want to appear in the best light, there’s a lot of jealousy and competition which leads them to behave far from admirably. Elena seems to have an inferiority complex when it comes to Lila, believing she is more than her, that she would be shining far brighter with the same opportunities. This can lead her to make bad decisions as she desperately tries to keep up with Lila, yet always conscious of the contrast between their experiences. This can also result in her acting unkindly to Lila, unable to see beyond her jealousy of all the wonderful things she believes Lila to be in possession of, wilfully ignoring her suffering.

Lila continues to be fiery and impulsive. She has a reputation in the neighbourhood and receives no sympathy when it’s clear she has been beaten, many believing that she deserved it and needed pulling into line. She is controlling and manipulative, forcing Elena to be part of her schemes against her will, and doesn’t give the pain she causes her friend a second thought. The reader does feel for her - she is only sixteen when she marries Stefano and deals with a lot at such a young age. However, there is a sense of the power she wields and her behaviour is difficult. Unlike Elena, she does seem to genuinely want her friend to succeed, despite the pain it causes her to see while her own intelligence is stifled. On occasion these feelings do spill out and she can be spiteful, driving a wedge between them.

There are moments where Elena mixes with other students and suddenly finds herself interacting comfortably, being understood. This doesn’t extend to her time outside of Naples however, where she masks her Neapolitan accent and works hard to be accepted. She succeeds to an extent, but it is shown to be fairly superficial and fragile. In contrast, when she returns to Naples, an act she dreads, they see the difference in her and so she feels out of place wherever she goes.

The socio-economic environment they grow up in is touched on throughout, as are the inequalities between men and women. It is accepted that women will be beaten in marriage and that they should behave according to their husband’s desires. The younger generations perpetuate the behaviour that was normalised in their youth. Elena’s ambitions are also limited by her gender, her male colleagues at school are offered far different opportunities for life after graduation. This stings Elena with a sense of injustice and the disappointment that comes with knowing she’s just as able as her male counterparts.

This is a stunning read that offers a deep insight into the lives of its young protagonists. Their characters are often unlikable yet you feel for them, seeing the events and situations that have formed their personalities. It’s an honest appraisal of friendship that doesn’t hide the dark side that comes with intimacy. This is a hard book to put down and I can’t wait to immerse myself once more into Elena and Lila’s story in the third book of the series.

Pick up a copy:
Bookshop
Foyles
Waterstones
Posted by Ramblings of a nobody at 14:41