The Devil and the Dark Water, Stuart Turton 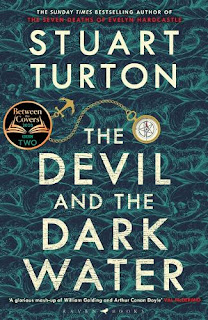 It’s 1634 and the Saardam is setting off from Batavia on its long journey to Amsterdam. Aboard are the governor general, Jan Haan, hoping to be admitted into the Gentlemen 17 on arrival, his family and mistress, a renowned detective, Samuel Pipps, boarding in chains for a crime unknown to most onboard, including his loyal assistant, Arent Hayes. There’s crew and treasure aplenty aboard the ship, and when things start going wrong, everyone seems to have motive. A demon known as Old Tom whispers to the passengers, tempting them to commit murder. Trapped in the confines of the ship, the tension grows rapidly as the sign of Old Tom spreads and seemingly impossible events unfold.

The opening is dramatic - a leper at the dock warns passengers that the ship is cursed before apparently self-combusting. On closer examination it’s noted that his tongue had been cut out and an injury to his leg means he would not have been able to position himself where he made the announcement. This is a brief taste of the type of mysteries ahead, and gets you hooked right away.

There are moments where the pace lags, and the vast array of characters can take a while to orient yourself with, but the subplots keep you interested. Sara, Jan Haan’s wife, is on surprisingly good terms with his mistress. She despises her cruel husband and is surprised to discover others have experienced a softer side in years past. Their daughter Lia is in possession of a brilliant mind but is forced to conceal her intelligence as it is not seen as fitting for her sex. In Batavia she was kept separate from the outside world and hates her father for the abuse he inflicts on Sara.

Arent seems to have a good heart, but he also has the mark of Old Tom on his wrist, a mark he received in childhood during a curious incident he doesn’t fully remember. There is a constant sense of mistrust, but Turton writes the characters in a way that draws you in to some of them, instinctively feeling that they can’t be malicious. Others, however, maintain a sense of mystery.

The second half of the book is where the action really ramps up with the smaller mysteries revealed and the peril to those onboard rising with every page. When the final reveal arrives it feels a little rushed, giving us a sense of the disorientation that the characters would feel as their accepted reality changes in a few short moments. The truth is complex and I definitely didn’t see it coming, yet was left feeling as though something were missing, that there had been a slight misstep with the characters we felt we knew acting in ways that didn’t feel quite true to them.

This is an interesting read, playing with the idea of superstition, guilt, and suspicion. Despite its historical setting, Turton is upfront about the fact historical accuracy comes second to plot, and the book is none the weaker for it. He creates a claustrophobic, intense atmosphere that has the overall feeling of a different time. The characters’ background stories and motivation make them intriguing players in a novel that defies definition.