How Was It For You? Women, Sex, Love and Power in the 1960s, Virginia Nicholson 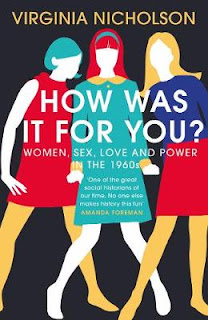 Nicholson’s latest book looks at the 1960s, a time of huge social change and liberation, and considers how progressive it really was for the women who lived through it. She takes a chronological approach, examining each year in turn, allowing the reader to see values and lifestyles shift across the course of the book. It is littered with testimony from those who lived through it, offering a personal insight. Interviewees include women who mixed in celebrity circles and had a public profile as well as those living normal lives but struggling with the same discrimination and enjoying the same freedoms. It is a book that evokes strong emotions and analyses famous events through the lens of gender history.

The 1960s began in an age of prosperity, and consumerism grew as new technologies and fashions became status symbols. Employment opportunities were limited for women but they could nonetheless expect to leave any secretarial college and walk into a job in the area of their choice. On the flip side, there was huge deprivation and housing problems. Many were living in slums, and aid was provided via a system of judgment which was marred with racism and separation from the struggles of those in need. Nicholson tells us about Pauline O’Mahony, aged just 16 in 1964, who was tasked with assessing the homes of those in need and who tried to side-step the discrimination in the system. She was on the side of the families and took on an unenviable task while also being on the receiving end of sexism in the office.

Sexism is present throughout with the constant disheartening reminder that men at the forefront of change were not interested in liberating women. The law did not protect them (the Sex Discrimination Act didn’t come into being until 1975) and there wasn’t the language to describe the misogyny inherent in society, leaving many feeling it was somehow their fault and not a universal problem. By the end of the decade the vocabulary of women’s liberation was beginning to spread and the belief in and power of protest was on the rise.

This is a fascinating book that considers the broad sweep of a remarkable decade that saw the Profumo Affair fill headlines, the advent of the contraceptive pill and the freedom it afforded women, an overhaul of fashion with miniskirts becoming the look of choice, the Abortion Act, and by its end, the National Women’s Liberation conference. It was a thrilling time to be alive with a widespread belief that anything was possible, yet it was still mired in sexual discrimination and exploitation that is truly shocking. It reveals a side of the 1960s that is often obscured in discussion of the sexual revolution. Nicholson writes in an accessible style, offering us a considered journey through an iconic decade that is hard to put down.

Pick up a copy:
Bookshop
Foyles
Waterstones
Posted by Ramblings of a nobody at 14:27