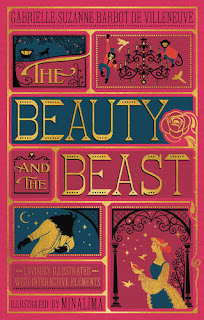 A tale as old as time, but not as you know it. Madame de Villeneuve’s original Beauty and the Beast is darker and more complex than the Disney version. Beauty’s father has fallen on hard times and is under pressure from Beauty’s selfish siblings to provide them with treasures. When he goes away for business he insists Beauty request a gift. She chooses a rose, knowing that he’ll easily be able to find one for free. Unfortunately, he tries picking one from the Beast’s garden, condemning her to a lifetime locked away with him.

The character of Beauty is sympathetic to begin with. She is kind and thoughtful despite her immediate family. As the novel progresses she begins to feel more otherworldly - she is selfless to a fault, beautiful beyond belief, and can play any and every instrument, speak countless languages, and generally excel at anything she tries her hand at. Despite the lavish praise that is heaped upon her however, we do see glimpses of capriciousness later in the tale, and a tendency toward the dramatic.

Her family don’t come off particularly well, even her father doesn’t argue against her being the one to go to the Palace. Later in the story we see how unwaveringly loyal to her family Beauty is despite the fact they insult and reject her. They feel in many ways more realistic - they have their human weaknesses and respond naturally, albeit not admirably, to events.

The Beast, for the most part, keeps to himself. He proves himself generous and kind through his actions but spends only a short amount of time with Beauty each day, simply asking for her hand in marriage. His counterpart appears to her in her dreams, her great Unknown. She falls for this mysterious man and wonders if he is also held prisoner in the Palace. Her feelings for him almost get in the way of her relationship with the Beast, despite the repeated advice not to be fooled by appearances.

This was an interesting and fairly enjoyable read that draws on a lot of familiar themes from other fairytales. The final section of the book, which seeks to explain the events that led up to it, is overly complex, convoluted, and frankly detracts from the rest of the tale. There are some shock revelations and a few lessons to learn from, but ultimately it would have been a stronger story without it. Nonetheless, it was fascinating to explore the original.