Midnight in Everwood, M. A. Kuzniar 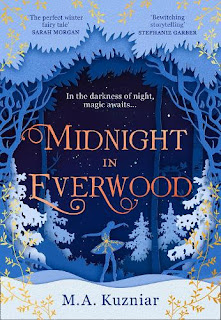 Nottingham, 1906, Christmas is on its way and with it, the end of Marietta’s dreams of becoming a professional dancer. Ballet is her life, the thing that gives her voice, yet her status-obsessed parents require her to give it up to marry well and live the life of a society wife. When the mysterious Dr. Drosselmeier moves to the neighbourhood he is met with countless invitations, parents falling over themselves to match him with their daughters. It soon becomes clear however that Marietta has caught his eye, and he becomes fixated on possessing her. In an attempt to escape an unhappy fate she finds herself stumbling into Everwood, a magical land that appears to hold wonderful potential. It doesn’t take long for the cracks in this sweet world to begin to appear, and Marietta wonders if she will ever find her way home.

The figure of Drosselmeier is deeply unsettling. He is manipulative and over-confident, invading Marietta’s personal space and lacing their outwardly polite conversations with thinly veiled threats. His behaviour is masked by the charming persona he puts on with the rest of her family, and even Marietta’s beloved brother Frederick dismisses her concerns when she raises them. In the depths of Everwood she continues to be haunted by Drosselmeier, who appears in her nightmares, and at times seems as though he might be there in person. He is a textbook abuser, but has the advantage of magic, making her situation feel all the more helpless.

Marietta lives a stifled life of expectation in her family home, denied the possibility of even expressing her desires. She has an ally in Frederick, who is also forced to deny his true self to fulfil the role demanded of him. Marietta does have moments of disobedience, but once she enters Everwood she becomes increasingly defiant. At times entirely warranted, at others foolhardy and excessively contrary, she can be a slightly frustrating protagonist. We see her grow over the course of the book however, her captivity offering her freedom in other ways. She learns to open herself to others, and to re-evaluate her perceptions of her own privilege. Her experiences in Everwood prove her strength and change the way she views the world and her place within it.

Everwood itself is richly drawn and decadently described. You can easily picture the lavish balls, smell the sweet scent of the sugared world (and worry at the state of their teeth living off a diet predominantly consisting of sugar), and imagine the gorgeous creations that Marietta, Dellara, and Pirlipata are dressed in as the king’s pets. We see the world as Marietta does, and witness her disillusionment as she discovers the world outside the palace and the suffering inflicted on the many for the benefit of the few.

The tyrant King Gelum displays some uncomfortable similarities to Drosselmeier - a desire to possess at any cost. He delights in the suffering of others and does not think twice about destroying those who cross him. Marietta soon learns the harsh consequences of defiance, but also the power of friendship and the willingness for sacrifice that comes with such fierce bonds. In such an intense environment passions run high and despair and love are intensified. Marietta learns not only of the power of sisterhood, but feels her first flushes of romantic, heartbreaking love.

This is an enjoyable, enchanting read that’s perfect for the festive season. Pedants like me will find the constantly odd sentence structures distracting, as well as Kuzniar’s passing fixations with certain slightly unusual word choices that feel unnatural. Nonetheless, you will be so swept up in the magical world, and keen to find out what happens next that this can be forgiven. Recommended for fans of modern fairy tales, light fantasy, romance, ballet, and cosy winter reads, this book ticks a lot of boxes.

Posted by Ramblings of a nobody at 14:13